Horror Early Review: City of the Lost by Stephen Blackmoore

Early Review: City of the Lost by Stephen Blackmoore 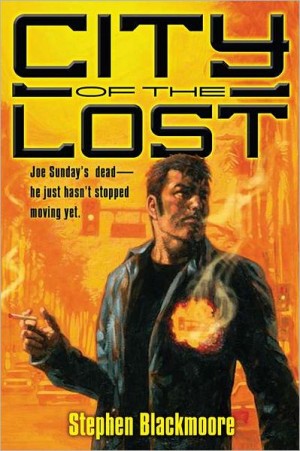 Kind thanks to DAW for providing a review copy

Joe Sunday has been a Los Angeles low-life for years, but his life gets a whole lot lower when he is killed by the rival of his crime boss-only to return as a zombie. His only hope is to find and steal a talisman that he learns can grant immortality. But, unfortunately for Joe, every other undead thug and crime boss in Los Angeles is looking for the same thing.

REVIEW
Whew! Lemme tell ya, if you’re in the mood for some down and dirty noir action with your supernatural fun, City of the Lost is where it’s at! Joe Sunday is your all around tough-as-nails L. A. enforcer who knocks heads and makes a pretty good living at it. All of this comes to a rather abrupt hault when his main employer hires him to knock off someone that is way off the normal meter. When he witnesses his best friend and co-worker kill himself (in a rather spectacular way), he knows things are a bit…off kilter. Sure enough, his newest mark is out for blood, and takes Joe out. But wait, Joe’s not dead. Now, Joe is a zombie; not the rambling, rotting type, but if he doesn’t do certain, er, things, the rotting definitely will commence, unless he gets his hands on a stone that may hold the key to immortality.

Told in Joe’s wry voice, City of the Lost grabs you hard on page one and keeps you rapt until the last page. Backed by a supporting cast including a young bruja that counts a bar tending demon as a friend, and a cop with his own agenda, Joe must fine the stone and figure out how to fix his little problem, before it fixes him. On his tail is an ancient man that’s been chasing the stone’s secret for hundreds of years, a beautiful woman that he may or may not be able to trust, a Nazi doctor that wants the stone for his own, and his henchmen, a skull cracker that has a sharp-toothed midget (we’re not talking human here) on a leash. Stephen Blackmoore writes like an old pro, and doesn’t flinch from some of the more violent characteristics of his anti-hero. He’s really, really good at writing gray characters, and yet manages to infuse his creations with humanity, even if they aren’t themselves human, which is a neat trick. City of the Lost is fast paced, funny, scary, at times, charming, and I couldn’t put it down. If you love the novels of Richard Kadray (Sandman Slim), Hank Schwaeble (Jake Hatcher series), and Steve Niles’ Cal McDonald series, then you’ll LOVE City of the Lost. What a way to start out the new year! This is a 2012 debut you won’t want to miss!

Pre-Order City of the Lost: Amazon