Blog Tour and Giveaway: Lust After Death by Daisy Harris

Please welcome Daisy Harris to the blog today! She’s the author of Lust After Death and is here courtesy of Bookish Snob Promotions. *She’s also offering one ecopy of Lust After Death to one lucky winner, so be sure to check the giveaway details at the end of the post!

Sex and Zombies
by Daisy Harris

I love zombies. Love, love, love. I also adore the Frankenstein-esque concept of creating human life through a combination of science, medicine, and flat-out wishful thinking. It was through this seemingly-unsexy slew of interests that I created my Love-Bots (also known as “steins”) and wrote the first book in the series, Lust After Death.

In Lust After Death, a re-animated bride escapes her evil creator only to end up “married” to a gruff, self-loathing zombie assassin named Bane. (He’s an assassin AND a zombie. Not an assassin of zombies.)

It’s Garden-of-Eden meets Zombieland meets Terminator meets Weird Science. To me, writing a zombie bride seemed like the most natural thing on the planet! After all, I’m a little tired of vampires. They’re so perfect and flawless. Vamps aren’t scary or disturbing at all! And where’s the fun in that?

One of my favorite zombie/Frankenstein types ever was Seven of Nine from the Borg. Scary in her Borg form, she was gorgeous once she’d been disconnected from the hive consciousness. Free will and self-determinacy factor highly in my Love-Bot series. When Josie’s under the control of her maker Adam, she becomes a mindless automaton—frightening even to herself. However, when she’s growing and learning, Josie is beautiful.

It helps that my steins don’t decompose. Flesh-preservation has evolved by leaps and bounds in this future I’ve created. And like Seven of Nine, most of my steins are good-looking to begin with. Many of them are built to be wives, or sex slaves, so they’re pretty handsome specimens of human.

Have your doubts? Comment below to enter for a chance to win LUST AFTER DEATH! And stop by my website for more Love-Bot stories!

*Please be sure to visit vvb32 Reads tomorrow, Oct. 7th, for the next tour stop, and thanks to Bookish Snob Promotions!
Purchase Lust After Death: Amazon

**GIVEAWAY DETAILS**
1.Giveaway is for one ecopy of Lust After Death by Daisy Harris
2.To enter, please leave a comment with your email address. Following the blog is not necessary, but is much appreciated.
3.Giveaway is INTERNATIONAL
4.Must be at least 18 to enter
5.Giveaway ENDS October 18th, 2011
6.Giveaway ebook kindly provided by the author 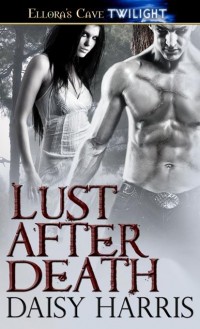 About Lust After Death:
In the Pacific Northwest, where life hurries to keep pace with technology, a re-animated bride named Josie struggles to escape her creator.

Assassin Bane Connor wants to get the girl to the Zombie Underground and receive his payoff—a mental reset that will erase his memories as well as his guilt. But an attack by a rival faction derails his rescue, and the wide-eyed female ignites desire like he’s never known.

The newborn stein needs touch to live, and wanting her is a complication Bane doesn’t need. The last thing a killer wants is a his lover who can read his thoughts, but if Josie can love him the way he’s programmed, perhaps Bane can find a way to heal his past. 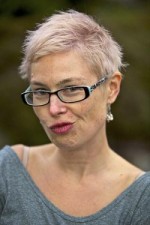 About Daisy Harris:
Birkenstock-wearing glamour girl and mother of two by immaculate conception, Daisy Harris still isn’t sure if she writes erotica. Her paranormal romances start out innocently enough. However, her characters behave like complete sluts. Much to Miss Harris’s dismay, the sex tends to get completely out of hand.