I recently asked the wonderful Alex Bledsoe to answer a few questions for me, and he graciously agreed! Alex is the author of the noir/fantasy series starring Eddie LaCrosse, the Memphis Vampires series, and the upcoming The Hum and the Shiver (Sept. 27.) Tor was also kind enough to offer a copy of The Girls with Games of Blood (Memphis Vampires #2) to one lucky winner, so be sure to check out the giveaway details at the bottom of the post!

Please welcome Alex to the blog! 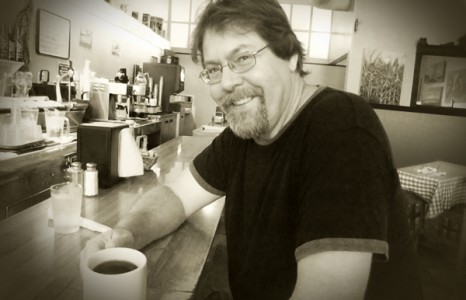 Alex, you’ve been everything from a reporter to a door-to-door vacuum salesman! Have you always known you wanted to write?
Oh, yes. Definitely. My earliest writing memory is of turning a “Batman” comic book into a prose story on my dad’s old manual typewriter. I got in trouble for wasting the ink on the typewriter ribbon.

Your Eddie LaCrosse series is an intriguing blend of noir suspense and high fantasy. What inspired you to combine the two genres?
I love fantasy, and I love hard-boiled mystery. I nursed the first Eddie LaCrosse story for years trying to write it as a straight fantasy epic, but it just never worked. When I eventually started over and tried writing that same fantasy story in the style of the mysteries I loved, it came to life. 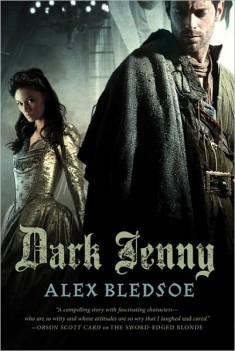 Your newest LaCrosse novel, Dark Jenny, just dropped. Do you have plans for more?
The next one will be out next spring. Titled Wake of the Bloody Angel, it puts Eddie in a whole new environment, and gives him a new sidekick. And as the title implies, he spends a lot of time at sea. And there are pirates.

Your Memphis Vampires series is very different from Eddie LaCrosse, and its main vamp, Zginski, isn’t a very sympathetic character. I always consider it pretty brave when a writer features a main character that unpalatable, but you make it work. Did you know right off that Zginski wasn’t gonna be the nicest guy?
Definitely. The literary vampires I admire–Dracula, Carmilla, Lestat—are most emphatically not nice. And I think readers accept a strong character, even if he’s not overtly sympathetic, as long as he’s understandable. After all, no one has a problem with Michael Corleone or Richard III. What makes Zginski interesting to me is poking holes in his armor, finding the things that get under his selfish skin and make him act for the benefit of someone besides himself.

But there’s also a conceptual level. At the core of my vampires is the idea that you, meaning the average person, draws their attention at your peril. Once they acknowledge your existence, you’re doomed. And you can’t have that sort of central idea, and then make your vampires all romantic and cuddly. 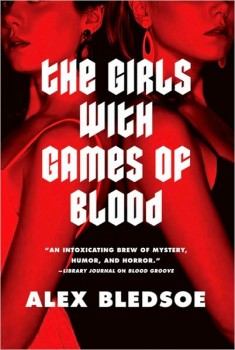 Will there be more Memphis Vamps? I adore the series and would love to see it continue!
I have one more novel, tentatively called Blood Will Rise Again, that resolves the overall story and themes from Blood Groove and The Girls with Games of Blood, but I have no idea when or if it will come out. As you can imagine, the market is glutted right now, and harsh, unromantic vampires like mine aren’t what most readers want. But I hope to get it out there someday. That’s the nice thing about vampires: they can always come back.

What are some of your biggest literary influences, and why?
The big one is Raymond Chandler. He created the private eye as we now know him, and beyond that, told stories that were both tough as nails and soft as…well, pulp. HP Lovecraft and the underrated Arthur Machen showed me how to be scary by implication. I was a huge fan of the late Robert B. Parker as well. Among the living: Andrew Vachss, Charles de Lint, Kelly McCullough, and Sarah Monette.

We all have authors we “pimp”. You know, the one’s that you’ll talk about ad nauseum, if only someone will give you the opening? Do you have one or two of those?
I’ll mention two.

1. Ekaterina Sedia, a fantasy author who writes in English but grew up in Russia and so has a completely different background of folklore and a totally unique voice. Start with The Alchemy of Stone.

2. Jarkko Sipila, a Finnish crime writer whose “Helsinki Homicide” series is just now being translated into English. They’re gritty police procedurals with a background unique to Finland. The first one is Against the Wall, which won the 2009 Best Finnish Crime Novel award. 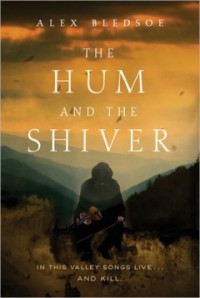 What do you like to do for fun when you’re not writing?
But writing is what I do for fun. I’m just lucky enough to get paid for it.

Is there any news of upcoming projects or events that you’d like to share?
My new novel, The Hum and the Shiver, will be out this October. It’s set in the contemporary South, and it’s what I call a “gravel road fantasy,” as opposed to an urban one. I’ll have an original Eddie LaCrosse short story in The New Hero, Vol II, and a Sir Francis Colby short story (you might remember him from the opening chapter of Blood Groove) in Haunted: 11 Tales of Ghost Hunting

**GIVEAWAY DETAILS**
1. Giveaway is for one copy of The Girls With Games of Blood to one winner.
2. To enter, please leave a comment or question for Alex with your email address.
3. Giveaway is open to US/Canada addresses only.
4. Giveaway ENDS 8/19/11. 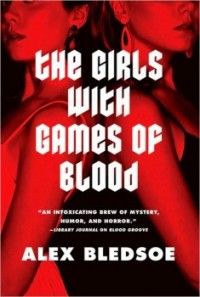 About the book:
Read my review of The Girls With Games of Blood
Listen to what I tell you, son, every word is true The sisters haunt the night, and might fight over you Nothing can steal your soul and stamp it in the mud Like being the new play-pretty for the girls with the games of blood . . .

The old song warns of the beautiful Bolade sisters, Patience and Prudence, whose undying rivalry was said to stretch even beyond the grave. But Count Rudolfo Vladimir Zginski has never heard the song. A suave Continental vampire, staked to death more than sixty years ago, he has risen to stalk the Southern nights of Memphis, Tennessee, circa 1975. Although new to the modern world, he has quickly developed a taste for its hot blood, willing women, and high-speed automobiles.

Yet the seventies are not without their perils, even for so cunning and ruthless a predator. Zginski’s insistent pursuit of a cherry 1973 Mach 1 Ford Mustang soon brings him into conflict with a legendary redneck sheriff with a short temper and a big baseball bat. His dangerous fascination with an enticing undead chanteuse and her equally seductive sister, threatens not only his own ageless existence, but that of the small group of modern-day vampires he has grudgingly taken under his wing. Zginski has already escaped limbo once, but can he free himself from the tangled web of the girls who play games of blood?

Alex Bledsoe, author of Blood Groove, returns to the world of the undead with a tale of fast cars and vengeance that never dies. . . .