Review:Ghosts of Manhattan by George Mann 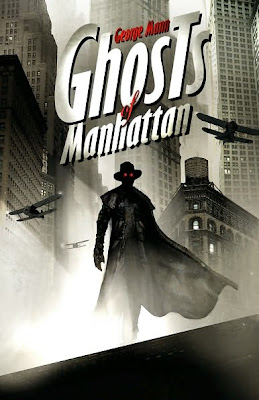 Ghosts of Manhattan by George Mann


Synopsis (from Barnes and Noble)
INTRODUCING THE WORLD’S FIRST STEAMPUNK SUPERHERO1926. New York. The Roaring Twenties. Jazz. Flappers. Prohibition. Coal-powered cars. A cold war with a British Empire that still covers half of the globe. Yet things have developed differently to established history. America is in the midst of a cold war with a British Empire that has only just buried Queen Victoria, her life artificially preserved to the age of 107. Coal-powered cars roar along roads thick with pedestrians, biplanes take off from standing with primitive rocket boosters and monsters lurk behind closed doors and around every corner. This is a time in need of heroes. It is a time for The Ghost. A series of targeted murders are occurring all over the city, the victims found with ancient Roman coins placed on their eyelids after death. The trail appears to lead to a group of Italian-American gangsters and their boss, who the mobsters have dubbed ‘The Roman’. However, as The Ghost soon discovers, there is more to The Roman than at first appears, and more bizarre happenings that he soon links to the man, including moss-golems posing as mobsters and a plot to bring an ancient pagan god into the physical world in a cavern beneath the city. As The Ghost draws nearer to The Roman and the center of his dangerous web, he must battle with foes both physical and supernatural and call on help from the most unexpected of quarters if he is to stop The Roman and halt the imminent destruction of the city.


MY REVIEW
Detective Felix Donovan is having a bad time of it. High profile men are being murdered in gruesome ways, and he has no leads, other than he’s sure that a violent gangster that calls himself The Roman has to have something to do with it. A vigilante that calls himself the Ghost is taking crime solving into his own hands, and a rich playboy is fighting the ghosts of his own violent past. Ghosts of Manhattan opens with a bang, with the Ghost violently taking care of a bank robbery in progress, killing most of the thugs and sending one back with a message to give to his boss, The Roman, of course. Ghosts of Manhattan takes place in an alternate New York of 1926 and has got a noir feel to it that I liken to the pulp stories that were so popular during the 30s. The Ghost is an interesting character, but clichés abound. There’s the rich, jaded playboy, disillusioned by the trappings of wealth and struggling with a painful past, the beautiful chanteuse that’s hiding a secret, the harried detective with the weight of a city on his shoulders, and of course, the mysterious mob boss that’s behind the wave of violent crime. There’s plenty of action and a fun scene involving biplanes, but some things felt a bit forced, and some of the descriptives were rather gross, when they really didn’t need to be. There’s nothing startlingly original in Ghosts of Manhattan, but it certainly wasn’t bad. It just wasn’t great, and I kind of wanted it to be great. I’m constantly on the lookout for the next good steampunk romp, so maybe I had my hopes up too high for this one. It certainly fit the bill as an “in between book”, you know, the light read that’s sometimes nice between more meaty books. If you like noir adventure with some steampunk elements, you’ll probably enjoy this one. It’s a quick read, and certainly worth a go.
**Purchase Ghosts of Manhattan:  Amazon

| Barnes and Noble
Visit the author at his website