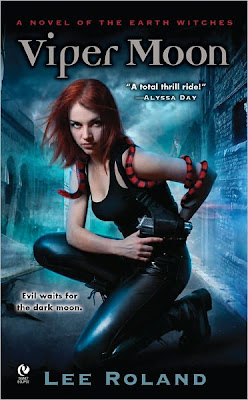 
Synopsis (from Barnes and Noble)
Cassandra Archer is the Huntress. She has faithfully served the Earth Mother for years, rescuing kidnapped children from monsters-both human and supernatural-dwelling in the ruins of the Barrows District. But when two children are kidnapped under similar circumstances, all clues point to a cataclysmic event on the next dark moon. Now Cass must race against the clock and prevent a sacrifice that could destroy the entire town….

MY REVIEW
Cassandra Archer is the Earth Mother’s Huntress, and it’s her job to save children from the clutches of the Barrows, Duivel, Missouri’s dirty little secret. Since she turned 18, and answered the call of the Earth Mother, it’s all Cass has known. Life consists of diving into the filth of the Barrows, and bringing out the children that are held in its clutches. Monsters roam the sewers, and roving gangs roam the streets above. When Phelan Flynn, hottie and cop, comes to her door, looking for his missing 13 year old sister, Cass agrees to help him. When a mob boss contacts her about finding his missing son, Cass realizes the children may be connected somehow, and that this may be more than she bargained for.
I really enjoyed getting to know Cass. Physically strong, yet emotionally fragile, Cass’ world revolves around saving children and getting by the best she can. She’s got a cat named Horus and two snakes named Nerfertiti and Nirah, and can communicate with them on a basic level as part of her gifts as Huntress. It’s rare that Cass lets a man get close, for fear he’ll tire of her lifestyle and bail, so when she finds herself attracted to Flynn, all her instincts tell her that she shouldn’t get involved, but she’s falling hard and fast. Flynn is drawn to Cass as well, but has trouble turning a blind eye to the things Cass has to do in order to get results. However, he’s determined to rescue his sister, no matter the cost. The romance in Viper Moon really enhanced the story and the dire situation and traumatic events make it easy to believe that Cass and Flynn could fall for each other so quickly. It’s also their bond that brings such an immediacy to the events, which are sometimes violent and tragic. There is another man in Cass’ life; Michael, owner of the Archangel, beautiful beyond belief, and surrounded with secrets and mystery. Cass is attracted to him, but she can’t get past the feeling that he’d like to own her as well as be with her. The author did a great job building the Barrows, and creates a creepy world of night creatures and other nasties that will make you shudder. Viper Moon is fast paced and fun, with twists and turns that you may not see coming. I’m looking forward to more books in this brand new series! want to put it down!
**Purchase Viper Moon:  Amazon