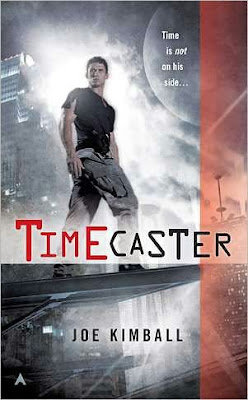 
Synopsis (from Barnes and Noble)
Chicago, 2064: Talon Avalon is a timecaster-one of a select few peace officers who can operate a TEV, the Tachyon Emission Visualizer, which records events (most specifically, crimes) that have already happened. With crime at an all-time low, Talon has little to do except give lectures to school kids and obsess on his wife’s profession as a licensed sex partner. Until one of her clients asks Talon to investigate a possible murder. When Talon uses the TEV to view the crime, the identity of the killer is unmistakable-it’s him, Talon Avalon.


MY REVIEW
Talon Avalon is a timecaster and a homicide detective. in 2064 Chicago. Murder is almost unheard of in this new utopia, and he spends a lot of his time lecturing to grade school kids. His wife is a social worker (aka a government licensed prostitute). When Talon’s neighbor shows up claiming that his aunt has been murdered and asks for his help, Talon is intrigued. When he goes to the sweet auntie’s apartment to investigate, he finds an apartment chock full of contraband such as paper books, liquor, and even a still. When he uses the TEV to trace the crime, he’s shocked to see himself kill the woman. It’s unmistakably him, but it just can’t be, and now it’s up to Talon to prove his innocence.
I am a HUGE fan of Joe Kimball’s (aka J.A. Konrath) Jaqueline “Jack” Daniels series, so when I found out he had a brand new sci-fi novel out, I didn’t hesitate to run out and buy it! Talon is actually Jack Daniels’ grandson and he partners up with the grandson of another main character in the Jack Daniels series, Harry McGlade, who’s grandson is just as disgusting, rude, and oversexed as his grandfather. Talon is a guy’s guy, and he adores his wife, but does NOT adore her profession, even though it keeps them in a huge house and also paid for his 2024 Corvette Stingray, retrofitted for biofuel and ridiculously expensive. Most people ride special bikes and nearly every available space is used to grow biofuel resources. Going on the run in 2064 Chicago isn’t an easy proposition, since everyone has a chip that serves as their credit cards, keys, ID, and more. But that’s ok, because Talon takes care of that problem using moxy and a particularly rambunctious raccoon (you’ll just have to trust me on this one.) He’s also being pursued by a fellow cop and timecaster that already has a vendetta against him, and is out for blood. Kimball’s trademark snark is on full display here, and the story is told from Talon’s POV. There’s lots of action, lots of cool futuristic gadgets, a ton of laughs, parallel universes, and a sex scene that had me in a fit of giggles (and it’s not what you think.) Timecaster probably won’t satisfy hardcore sci-fi fans, but that’s ok, because I’m not a fan of hard sci-fi, and it’s not meant to be hardcore. This was a fun, quick read (because I didn’t want to put it down), and the ending opens up a whole new can of worms, so we can be sure there will be another in the series!
Visit the author at his website
**Purchase Timecaster**
Amazon