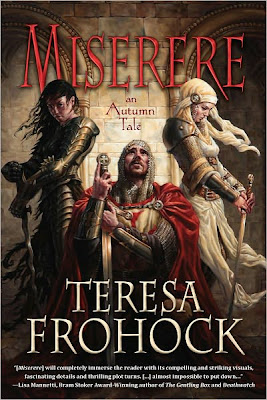 
Synopsis (from Barnes and Noble)
Exiled exorcist Lucian Negru deserted his lover in Hell in exchange for saving his sister Catarina’s soul, but Catarina doesn’t want salvation. She wants Lucian to help her fulfill her dark covenant with the Fallen Angels by using his power to open the Hell Gates. Catarina intends to lead the Fallen’s hordes out of Hell and into the parallel dimension of Woerld, Heaven’s frontline of defense between Earth and Hell. When Lucian refuses to help his sister, she imprisons and cripples him, but Lucian learns that Rachael, the lover he betrayed and abandoned in Hell, is dying from a demonic possession. Determined to rescue Rachael from the demon he unleashed on her soul, Lucian flees his sister, but Catarina’s wrath isn’t so easy to escape!


MY REVIEW
Miserere is a hard one to review. Not because I didn’t like it, actually, I adored it, but it is simultaneously one of the most complex, yet compulsively readable novels I’ve ever read. Topping out at just under 300 pages, Ms. Frohock manages to pack a wallop of a story into her pages. Lush and emotional, it takes the reader on a journey about betrayel and redemption, and leaves them gasping. Ok, that was my journey, but still. There’s potential for war raging between the Fallen and the forces that would keep them from passing through the land that stands between Hell and Earth, the place called Woerld. I pictured a layer cake, with Heaven on top, then Earth, Woerld, and Hell on the bottom, with the Crimson Veil as the divide between Woerld and Earth. Woerld is Earth’s last defense against the hordes of Hell, and Lucien’s twin sister, Catarina, is determined that they should be let loose. Needless to say, this would be very, very bad, and Lucien, his new charge Lindsay, and Rachael, will do anything to stop her. Here’s the problem: Catarina has held Lucien as her prisoner forever, after he abandoned Rachael at the gates of Hell to save his sister’s soul. This was not to be however, and Catarina has become a monster, in league with the foulest of evil. Her consort is a Cerebus, and she takes pleasure in the pain of others, especially those who Lucien cares about. Foundlings that slip through the Veil are taken in by Elders, such as Lucien and Rachael, and are taught to fight against the threat that is the Fallen. Rachael was eventually brought out of Hell, but not before a demon, the Wyrm, invaded her body, and is possessing her more and more each day. She’s fought the Wyrm so far, but her time is short, and Lucien knows he must exorcise the demon before it’s too late. Then there’s the matter of his new foundling, Lindsay, who’s burgeoning power may be more like his than he’d like to believe.

I really loved the concept behind Woerld, where emissaries representing the world’s religions converge to aid each other in a common goal, defense against the Fallen. Yes, Christianity is explored here, but this is not a “Christian” novel, it is firmly a fantasy, with horror elements, and uses the tenets of faith as a thread that binds our heroes together. Not to mention, if you have a story involving fallen angels and demons, there will more than likely be religious elements involved. More so for me, however, was the emphasis on the power of love and loyalty, and the lengths we will go to in order to save the ones we love. I don’t consider myself to be a “religious” person, and I really enjoyed the themes used to tell Lucien and Rachael’s story. The author does not shy away from powerful imagery, and her descriptions of the Wastelands and Woerld served to fully immerse me in the novel. Magic is thick and plentiful, and make no mistake, Catarina is one of the nastiest villians I’ve encountered in a long time, even as she desperately tries to regain the love of her twin brother, although that love is twisted and perverted as a result of her own greed and selfishness. I particularly enjoyed the bond that forms between Lucien and Lindsay and how Lucien’s undying love for Rachael carries him through, even as he knows he may very well be judged harshly. If you enjoy rich fantasy, chills, intrigue, and angel and demon lore, you’ll love this book!