Review: Lure of the Wicked (Dark Mission #2) by Karina Cooper 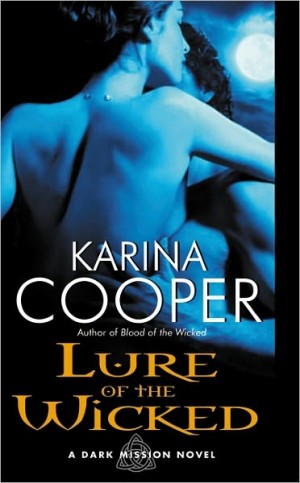 4/5
Kind thanks to Avon for providing a review copy

Naomi West was plucked from one prison and placed undercover in another: the gilded cage that is Timeless, New Seattle’s premier spa and resort, where owner Phinneas Clarke—the most seductive man Naomi has ever met—may be hiding a killer. She’s an agent of the Holy Order, trained to hunt the guilty and render justice. But while she’s tracking down a rogue agent on a killing spree, Phin is determined to uncover her most damning—and dangerous—secrets. Whatever the cost.

REVIEW
I really enjoyed Blood of the Wicked (Dark Mission #1) so I couldn’t wait to dive into Lure of the Wicked. Lure of the Wicked is Naomi West’s story and follows her as she takes an assignment in an exclusive spa in New Seattle called Timeless. Strange things have been happening at Timeless, people are dying, and Naomi must track down a rogue agent with blood on his hands. When Naomi meets the owner, Phin Clarke, she realizes that he may be a distraction, which is the last thing she needs. She’s determined to conclude this mission, and get the hell out of Timeless. Little does Naomi know, there’s a power contained within the walls of Timeless that people are willing to kill, and die, for.

Lure of the Wicked isn’t just paranormal romance or action, it’s a fish out of water story. Naomi West is supposed to be tough, stoic, and without feeling, right? She’s a missionary for the Holy Order, and takes her job very seriously. The problem is, the reason for Timeless’ existence is so people have a place to go to relax and let things go, and it’s precisely the reason it gets right under Naomi’s skin. Yes, there’s a killer on the loose, and ass-kicking aplenty, but the real story lies with Naomi and her resistance to letting go, not only of her control, but to the pain of her past, and to possible love. When the mother that abandoned her when she was five shows up at the spa, her emotional walls crumble even more. She may even be falling for Phin, but he’s hiding a secret that could drive a permanent wedge between them. The mystery of the rogue agent provides a nice backdrop for Phin and Naomi’s (super hot) romance, and Karina Cooper’s writing crackles with tension.

Lure of the Wicked isn’t as dark as Blood of the Wicked, but there’s plenty of action to satisfy this thriller fan. Are there sex scenes? You bet! They’re so well crafted and intrinsic to the story, so I’m all for that. There’s also a fun scene that brings to mind Pretty Woman , and a there’s nice twist at the end that I didn’t see coming! I can’t wait for the next book in this series!

Purchase Lure of the Wicked: Amazon