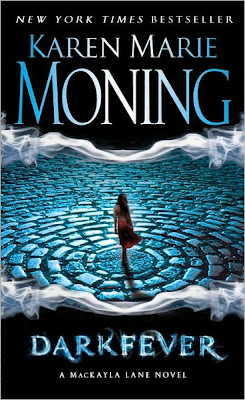 Synopsis (from BN.com)
MacKayla Lane’s life is good. She has great friends, a decent job, and a car that breaks down only every other week or so. In other words, she’s your perfectly ordinary twenty-first-century woman.Or so she thinks…until something extraordinary happens.When her sister is murdered, leaving a single clue to her death – a cryptic message on Mac’s cell phone – Mac journeys to Ireland in search of answers. The quest to find her sister’s killer draws her into a shadowy realm where nothing is as it seems, where good and evil wear the same treacherously seductive mask. She is soon faced with an even greater challenge: staying alive long enough to learn how to handle a power she had no idea she possessed – a gift that allows her to see beyond the world of man, into the dangerous realm of the Fae…


MY REVIEW
I picked up Darkfever at the urging of my partner in crime, Chelsea, of Vampire Book Club, and I’m really glad I did! I loved how the author took a rather annoying, somewhat spoiled Georgia peach and threw her into a situation that forced her to put on her big girl panties really, really quickly. Jericho Barrons’ Dublin is not the charmed southern life MacKayla “Mac” Lane is used to at all, and she’s forced to make some pretty nasty discoveries fairly soon after arriving to investigate the brutal death of her older sister. I’ll be honest, Mac kinda got on my nerves in the beginning. She talks about how pretty and well put together she is…a lot, and I wanted to give her a firm smack and maybe give that blond ponytail a good, hard yank, but I digress. That’s who she is at the start of the story; coddled, every need met by her parents, and not a care in the world. When she finds out about the death of her sister, however, that safe, soft world is shattered, and she’ll do anything to get to the bottom of things.

Going all the way to Dublin, without the blessing of her parents, who are shattered, is pretty brave for someone like Mac. When she meets Jericho Barrons, and discovers exactly what lurks in the shadows, she has to reach deep inside herself to discover hidden strength that she never knew she had. The world of the fae is opened to her, and it’s most definitely NOT the stuff of fairytales. There are shades that linger in the shadows, waiting to devour hapless victims, creatures that feed off of human beauty, and fae that can even kill by sexing you up to much. Yep, death by sex. It’s enough to drive any self respecting southern girl insane. But Mac isn’t just any southern girl. She can see through fae glamour, and it’s an asset that some will kill to possess. She’s sensitive to a book that Barrons will do anything to get his hands on, and if he has to use her a little bit to get to it, then so be it. Arrogant, painfully handsome, and for Mac, incessantly annoying, she finds herself an unwitting pawn in a game she’s only beginning to understand. Darkfever was a really good start to what I know is going to be quite a ride. Bring on the Darkness.
**Purchase Fever**
Amazon