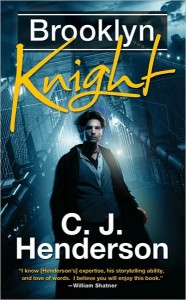 Synopsis (from Barnes and Noble)

Professor Piers Knight is an esteemed curator at the Brooklyn Museum and is regarded by many on the staff as a revered institution of his own if not an outright curiosity. Knight’s portfolio includes lost civilizations; arcane cultures, languages, and belief; and more than a little bit of the history of magic and mysticism.What his contemporaries don’t know is that in addition to being a scholar of all things ancient he is schooled in the uses of magical artifacts, the teachings of forgotten deities, and the threats of unseen dangers.If a mysterious object surfaces, Professor Knight makes it his job to figure it out–and make sure it stays out of dangerous hands.A contemporary on an expedition in the Middle East calls Knight’s attention to a mysterious object in the collection of the Brooklyn Museum … just before it becomes the target of a sorcerous attack that leads to a siege on a local precinct house by a fire elemental.What looks like an ordinary inscribed stone may unlock an otherworldly Armageddon that certain dark powers are all too eager to bring about–and only Piers Knight stands in their way.


MY REVIEW
Brooklyn Knight is a rather cute adventure set in New York, and opens with our hero, Professor Piers Knight getting a call from his former colleague, who may have found the key to unlocking an ancient mystery. Memak’tori was a significantly advanced civilization in the Euphrates River Valley whose inhabitants mysteriously disappeared, causing speculation that their hubris was the cause of some sort of grand punishment. Pretty, red-headed Bridget Elkins is fresh off the farm and looking forward to her training as Knight’s assistant. She’ll definitely get more than she bargained for when thieves try to steal the Dream Stone (which may have to do with the disappearances at Memak’tori), and her entire world view is turned on its head when she discovers magic just may be real.
Brooklyn Knight wasn’t the easiest read for me. Not that it’s bad, but the character of Piers Knight is quite old fashioned, his manner of speaking is also very old fashioned, and he’s only 43. He reminded me of a doddering old professor twice his age, and it took me a bit to get used to his affectations. At first, Piers treats Bridget like a ditzy sidekick, fresh from the farm, and (I do declare) ignorant about the ways of the big city, but eventually he realizes that she’s not as ignorant as she first appears. One odd scene was when Bridget discovers that most of the females that Piers works for lust after him, but even though he makes a few comments to Bridget about her attractiveness, he still comes across as slightly asexual (at least in the first half of the book), but I digress. Brooklyn Knight is written in the manner of an old pulp adventure, so if you dig those, you’ll dig Brooklyn Knight. Sometimes Piers’ sarcasm can be eye rolling, and sentence construction seemed stilted at times (to me), but there’s lots of action, plus magic, ghosts, terrorist plots, and other oddities, and if you like adventure and mystery a la Indiana Jones, you’ll enjoy this one. Once I got used to the writing style, I found myself enjoying the story for what it was, and the author’s obvious love of New York comes across on nearly every page. If you’re looking for something cute and light, in between heavier reads, you’ll probably like Brooklyn Knight.
**Purchase Brooklyn Knight: Amazon