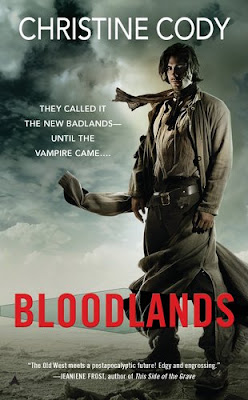 
Synopsis (from Barnes and Noble)
It was called the New Badlands, home to the survivors of a cataclysm that altered the entire nation. Then the vampires arrived, and it was rechristened the Bloodlands. Not because of the vampire, but because of the gun-for-hire who’d decided to slay every monster in the country by any and every means necessary.


MY REVIEW
Mariah Lyander, who’s family  slaughtered in cold blood,  has come to live in the New Badlands with her Intel Dog (smarter than the average bear, er, dog), Chaplin, in an underground bunker. When a stranger, a man named Gabriel, is wounded and begs for her help, she lets him in, against her own better judgement. Gabriel is searching for Abby, the woman he loves, who left suddenly, and without explanation. Mariah has been alone for a while, and Gabriel awakens feelings in her that she thought were gone for good. Water is a precious commodity, and Mariah has done her best to make this underground dwelling safe for her and the rest of its inhabitants. When they are threatened by a man named Stamp and his vicious crew, Mariah may have to look to Gabriel for help, even though she suspects him of being a monster just like the one that’s been roaming the night aboveground, slaughtering humans.

With the New Badlands, Christine Cody creates a world that’s a cross between Mad Max, Firefly, and the Wild West. Gabriel is a vampire searching for redemption, and determined to hide his true nature. Mariah is tough and damaged, but her feelings for Gabriel are undeniable. There’s sufficient sexual tension throughout the story, and Gabriel has a White Knight streak a mile long. Stamp is a former Shredder, tasked with eliminating preternaturals and is determined to wipe them from this world, with impunity, and without mercy. I enjoyed the tense relationship between Gabriel and Mariah, but I wanted to read more about the New Badlands and the events that led up to such cataclysmic changes for humanity, so I’m hopeful we’ll get more in the next couple of books. Lots of character set up is done in this one, but be patient, it’s worth the payoff! There’s also a really nice twist that I’ll admit I didn’t see coming, and the promise of an awesome (trust me on this one) final showdown will keep you turning the pages. Bloodlands is a fun start to a promising new series!
**Pre-Order Bloodlands:
Amazon

| Barnes and Noble | The Book Depository
Visit the author at her website
Read my interview with Christine!