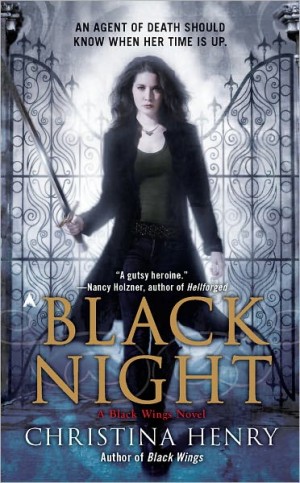 Madeline Black is an Agent of death, meaning she escorts the souls of people who have died to the afterlife. Of course, not everyone is happy to see her…

If obstinate dead people were all that Maddy had to worry about, life would be much easier. But the best-laid plans of Agents and fallen angels often go awry. Deaths are occurring contrary to the natural order, Maddy’s being stalked by foes inside and outside of her family, and her two loves-her bodyguard, Gabriel, and her doughnut-loving gargoyle, Beezle-have disappeared. But because Maddy is Lucifer’s granddaughter, things are expected of her, things like delicate diplomatic missions to other realms.

REVIEW
Black Night starts off with a bang, and pretty much doesn’t let up. On the way home from a reaping, Maddy is attacked by unknown magic and then, with Gabriel and J.B. come across the dismembered body of a werewolf. Maddy realizes this might be the work of Samiel, who is the son of Ramuell, the nephilim she killed, rather spectacularly, in Black Wings. It also doesn’t help matters that Antares, her half brother, is also out for blood. He’s probably irritated that Maddy has been named Azazel’s heir, among other things, and even though he has no magic of his own, he’s able to wield spells made my his late mother, a witch. That and a nasty attitude make a pretty formidable combo, and it’s just one more thing on the ever growing problem list that Maddy is going to have to deal with in Black Night. Maddy is informed that she must travel to the fae kingdom ruled by Amarantha to negotiate a new land and power treaty on the behalf of the Fallen, Maddy knows she’ll need every tool and weapon in her arsenal if she and her friends are going to be able to come home unscathed. The ante is upped quite considerably when Maddy discovers that in order to save Gabriel, she’ll have to go up against an evil that no one has survived in over a thousand years.

Power plays and intrigue are the order of the day in Black Night, and the romantic tension between Maddy and not one, but three guys is so thick you could cut it with a knife, or maybe a really sharp demon claw. Gabriel is absent for much of Black Night, so we get to spend quite a bit of time with Nathaniel, and J.B., who makes it no secret that he’s interested in more than friendship with Maddy. Maddy is also learning how to control her increasing powers, and also what being Lucifer’s granddaughter really means. Maddy’s loyal gargoyle Beezle is at her side, even if he is snoozing more than usual, and he always charms my socks off. Ms. Henry definitely brought her A-game in this one. Maddy is put through the emotional and physical ringer, and even brought me to tears at one point. Maddy is more mature and sure of her powers, has found her inner strength, and will do anything for the one’s she loves. She’s a heroine that I’m proud to root for. I really enjoyed Black Wings, but I loved Black Night, and luckily, there’s plenty of good stuff left for the next book and beyond!