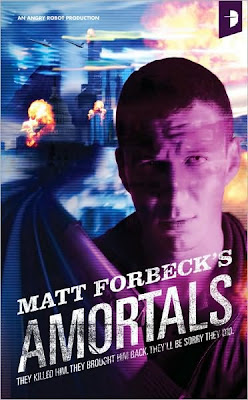 Synopsis (from BN.com)
THE VERY BEST PERSON TO CATCH YOUR KILLER…IS YOU.Matt Forbeck arrives as the new king of high-concept – with a blockbuster action movie in a book. In the near future, scientists solve the problem of mortality by learning how to backup and restore a persons memories into a vat-bred clone. When Secret Service agent Ronan “Methusaleh” Dooley is brutally murdered, he’s brought back from the dead one more time to hunt his killer, but this time those who wanted him dead are much closer to home.

It’s 2168 and Secret Service Agent Ronan Dooley watches himself die for the 8th time. It’s not pretty. Strapped to a chair, blindfolded, beaten and helpless, Ronan watches as an unknown killer shoots him in the head multiple times. The killer makes it very clear that they do not want Ronan to return, but it’s too late for that. He’s already been reborn and the Secret Service wants him to find his own killer. At almost 200 years old, Ronan has seen a lot, and died a lot, but never like this, and he wants to get to the bottom of it as well. After being reluctantly partnered with a woman that he himself requested (but doesn’t remember doing so), he sets out to find the killer, before another attempt at his life is made. It also doesn’t help that he has a radical group after him called the One Resurrectionists (who do not believe in the Amortal Project), and there’s a possibility that one of his grandsons is involved.
The thought of being “reborn” so many times makes me want to blink. A lot. The sheer amount of descendants Dooley has amassed in a little under 200 years is daunting (he’s on great grandson #6), and I can’t imagine what it would be like to know that if you’re killed, you’ll have another chance at life the next day. Dooly has a good guy streak a mile long, and none of the swagger that you would think would come from someone that is considered so important to the government that he’s the longest living man, with automatic rebirth following his death. People can purchase insurance that assures them they will be reborn, but the cost is exorbitant, and with this option available, medical advances have virtually stopped, leaving the poor with no recourse if they get sick, but the rich never have to worry, knowing they’ll be reborn as many times as they’d like. Amortals reads like a really good action flick (I mean that in a good way). I had no problem picturing how the action unfolded because the author’s descriptives are that good. The twists and turns are nearly constant and the author really gets across the terrifying implications that cloning can have for humanity. I never quite knew who to trust, except for our hero, who narrates the story, and I enjoyed seeing how things unfolded and the surprising direction some characters took. If you enjoy sci-fi action and plenty of cool gadgets, along with a hero to root for, you’ll love Amortals!