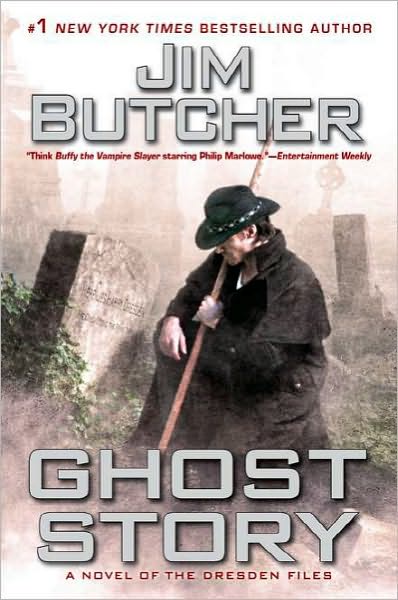 Synopsis
When we last left the mighty wizard detective Harry Dresden, he wasn’t doing well. In fact, he had been murdered by an unknown assassin.But being dead doesn’t stop him when his friends are in danger. Except now he has nobody, and no magic to help him. And there are also several dark spirits roaming the Chicago shadows who owe Harry some payback of their own.To save his friends-and his own soul-Harry will have to pull off the ultimate trick without any magic…


MY REVIEW
**I’ve done my best to avoid spoilers, but this being #13 in a series, there are some inevitable details that I felt I had to include**
Mortals connected to all things supernatural are being hunted and spirited away by creatures that haven’t been seen in thousands of years. Karrin Murphy, with the help of her friends and allies, are trying to keep more disappearances from happening, but it’s getting harder and harder to contain the growing threat. Dresden has been sent back to the mortal realm from “between” to take care of some unfinished business, even though no one will tell him what that business is. All he knows is that if he doesn’t go back, three people close to him will suffer or die, and he can’t let that happen. Harry enlists the reluctant help of Morty the necroomancer, and learns that Murphy’s allies want her to use the Swords of the Cross, some of the most powerful weapons against evil in existence to defeat the Fomor (the nasties threatening Chicago.)

See, when Harry unleashed the magic to save someone dear to him, it destroyed every member of the Red Court, creating a veritable power vacuum. Their holdings were so vast that every evil supernatural group is going after what they can, and killing whoever gets in their way. After being grievously injured in the fight, Molly (Harry’s apprentice) is now an enemy to the White Council, and she’s possibly gone a bit crazy as well. With Harry dead, Molly has declared Chicago protected and is calling herself the Ragged Lady. Lea, Harry’s fairy godmother, has been training Molly, and now Molly is killer-kickass. Seriously. Molly has got some serious mojo, but Harry fears for her life and her sanity.

Ghost Story has been the most introspective of the series, which makes sense, with Harry’s death, and it’s also one of the most heartbreaking. Changes twisted me into all kinds of knots, and things don’t get any lighter in Ghost Story. Harry has to do some serious soul searching here, and dig deep inside to find the strength to save those he loves, and the city he loves. Harry takes a young thug (who has a penchant for Dickens) under his wing, that can hear Harry without magical aid, and I really enjoyed watching this friendship unfold. Harry’s “conversation” with Father Forthill when he sends the kid to him for help was a bit of a highlight for me. We also go back in time with Harry, learning about his upbringing and the experiences that made him what he is, which, to me, was fascinating. The previous books have gone into Harry’s past, but nothing like this. The fighting is epic (to say the least), and Harry’s up against enemies both new and old, not to mention very, very powerful. He’ll fight for his friends, and for his very soul, and the ending is nothing short of jaw dropping. After 13 books, I’m still wild about Harry, and reading a Dresden novel, for me, is like coming home. Each one is better than the last, just when I think they can’t possibly get better. All I can say is, get ready Dresden fans, ‘cause Ghost Story is gonna take you on a ride you won’t soon forget.