I’m so excited to have the awesome Christine Cody (aka Chris Marie Green) on the blog today to talk about her new Western vampire series, Bloodlands!

Please welcome Christine to the blog! 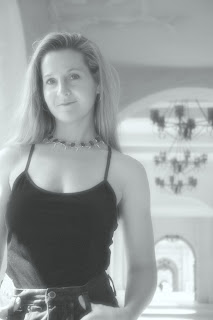 Can you tell us a bit about your brand new series, Bloodlands?

The question I started out with is: “What if the typical gunslinger who had lost his humanity was actually a guy who slings fangs, not bullets? And what if he had literally lost that humanity because he’s a vampire?” So what we have is a postapocalyptic Western about Gabriel, a vampire who has left the urban hubs to come out to the desolate, terrible New Badlands because he’s tracking down the woman he loves. When he’s attacked by some “bad guys,” a small group of reluctant underground settlers end up taking him in. I had a lot of fun using classic Western tropes, like the “drifter in search of his humanity,” the “feisty put-upon settlers,” and the “cruel, wealthier rancher next door,” but with a supernatural slant. Basically, the first book can be pitched as a paranormal Shane meets Mad Max. The following two books (which come out in the months after Bloodlands) really open up the world, because the urban hubs come into play, too.

How many books are planned for the series?

I wrote a trilogy (released July 26, August 30, and September 27). The first book is called Bloodlands, the second Blood Rules, the third In Blood We Trust.

What are a few of your biggest literary influences? 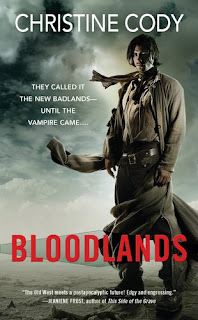 I’ve always been an eclectic reader—everything from horror to romance to non-fiction to fantasy. When I was in late grade school and middle school, I was a huge horror junky, reading everyone from Stephen King to John Saul to VC Andrews. I wouldn’t have ever expected to say this, but I realized pretty recently that VC Andrews was influential for me. I loved the whole Southern gothic horror, warped romance hybrid as well as the heightened, crazy, twisty drama. I love Maggie Osborne’s Western romances, and when I was growing up, I was addicted to Jennifer Wilde and Valerie Sherwood in particular. I’d say a pivotal book for me was To Kill a Mockingbird—it was the first book that moved me to tears and made me truly feel as if I were living in the body of a character (that would be Scout).

I am currently addicted to the A Song of Ice and Fire series. I cannot stop reading the books, and I’ve been trying like crazy to avoid spoilers, which is not very easy when I’m constantly and masochistically going on message boards to check out what other people have to say. I’m just finishing A Clash of Kings, and I’m sort of afraid to start A Storm of Swords—I’ve been warned about a certain…”red” event. Yikes.

It’s so hard to pick a favorite destination because there’s something to love about everyplace I go. As far as feeling “at home” in certain places, I’d pick London and New Orleans. The minute I stepped foot into both spots, it felt as if I belonged there. It might be because of the haunted histories, LOL. Japan blew my mind. My dream destination is Egypt. I’d also love to, someday, be a part of an archeological dig—I saw a group of teachers taking part in one at Jamestown, and I haven’t been able to shake the idea ever since, LOL. 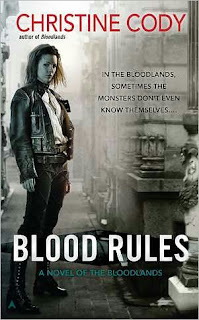 What’s one of the most daring things you’ve ever done?

Hmmm…I think I’m actually not very daring. Although you might say that I had to suck it up when I went to Japan, where a lot of the signs looked like beautiful squiggles to me. I was visiting friends who lived there, but I took a few side trips by myself. I even went to a ryokan, a traditional Japanese inn, where nobody really spoke English. It really took me out of my comfort zone, but it was awesome. You should’ve seen the food!

Name something that makes you laugh out loud.

If someone were to write a book about you, what would the title be?

Probably something like “Nerd on a Wire.” I say that because I know who I am—a total nerd—but throughout life, you realize that you’re different things to different people. Sometimes it feels as if I’m leaning in one direction with a certain person or group, but I’m always very aware that I’m still keeping my balance as that nerd. 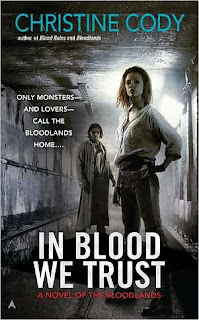 I’m hoping that a new series idea will sell—I’m waiting to hear about it as we speak. I’d call it a hybrid of vampires, high fantasy, and Spartacus: Blood and Sand, LOL. So we can just go ahead and call it supernatural epic fantasy romance. I can’t *wait* to dive into that world!Also, if anyone wants more information about Bloodlands or my other books, you can check out my website at www.bloodlands.net. You can also follow me on Twitter, and Facebook. Thanks so much, everyone!


Read my review of Bloodlands