Interview and Giveaway with Teresa Frohock

Today on the blog I’ve got the lovely Teresa Frohock, author of the wonderful fantasy Miserere: An Autumn Tale. A copy of the book is also up for grabs so be sure to see the details at the end of the post!


Please welcome Teresa to the blog! 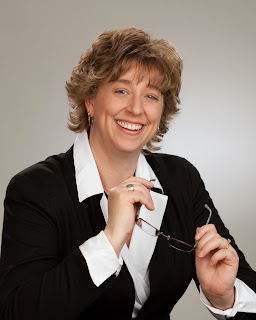 Miserere is such a beautifully written book. How long have you been writing, and why did you decide on fantasy as your genre?

I started writing for publication when I was in my late teens, early twenties; however, I had something of an attitude in those years and believed in my ART. That would have been fine if I had a good grasp on storytelling techniques, but I didn’t, and since I resisted learning, I failed miserably. I wrote one novel with the proverbial cast of thousands and it flopped like a dying fish. With good reason—it was poorly executed.
Then my life just got full and I quit writing for many years. However, I continued to read fiction and began to study the novels I read to see what worked and what didn’t. I’ve always loved fantasy, although I did quit reading it for many years. Then one day I picked up a new novel by one of my favorite authors, Patricia McKillip, and I fell in love with the genre all over again. Now I’m playing catch-up and reading all the wonderful novels I’ve missed in the interim.
I just love fantasy. I enjoy imagining strange new worlds and cultures and I like to use fantastic worlds to test some of my homegrown bass-ackward theories. I adore fairy tales and magical realism. I think that’s why I enjoy Spanish and Latin American literature so much—the divine is entwined so deeply in everyday life that it’s almost impossible to separate from reality. I love exploring the mystical in our lives and fantasy is a perfect genre to investigate the supernatural.

The attention to detail in Miserere is impeccable. How long did it take you to write, from first draft to finished copy?

Miserere took me two years to write. The reason was that the first draft moved up toward the novel’s climax, then flat-lined. I had to completely rethink the second half of the novel. When I re-wrote the second half, I had portions of the first half that didn’t jibe with the second half, so I had to go back through and re-write parts of the first half.
I think, overall, I spent more time editing and delineating the material than actually writing it—six to eight months to be exact. I tried to stay very, very focused so I didn’t trawl off into any tangents.

What are some of your biggest literary influences, and why?

Edgar Allen Poe, Toni Morrison, Alice Walker, Gabriel García Márquez, Umberto Eco, Peter S. Beagle, and Patricia McKillip are the ones that roll to the top of my head.
I’m influenced by all the wonderful writers out there; they all teach me something new. However, this group pops immediately into my head, because of their precise use of language. For brevity’s sake, I’ll talk about Poe. In his story “The Fall of the House of Usher” Poe describes a fetid lake, but he deliberately chooses to use the word “tarn.”
Tarn is an ugly little word and even if you’re not sure of the meaning, a tarn sounds like something nasty, which it is. Poe went to that kind of meticulous detail in all his words. The cadence of his sentences reflected the mood of his stories from the first line. He truly was a master of his stories.
Patricia McKillip and Peter S. Beagle are so in touch with the emotions of their characters, and they are able to impart those special attributes that make us human into their stories. I never get tired of reading their books or stories, because they so deftly show me some piece of myself hidden there.
Morrison and Walker also have that special magic. I just love reading anything by Toni Morrison; it always feels like she is right there beside me, telling me the story with her own unique voice. Walker has the innate talent of translating the most mundane experience into the divine.
Márquez and Eco both manipulate language masterfully to convey their stories. Their styles are very fluid, and they both embrace the supernatural as part of daily life.

Did you have any favorite authors when you were growing up?

I worshipped at the altar of Stephen King, Patricia McKillip, and later on, John Gardner.

How do you think growing up in a small town influenced your writing?

I grew up in a rural area where we were within walking distance of nothing. So every Saturday morning, my dad would round all three of us up and drive us into town to the Reidsville Public Library. We’d get there around nine in the morning and stay until the library closed at noon. We were allowed to check out as many books as we liked, and I spent the whole summer reading.I think it was that early exposure to the library that really defined my love of literature. It’s one of the reasons I love libraries so much and see their value to our communities.

I noticed that Miserere is Book 1 of the Katharoi. Do you have any firm plans on how many you’d like to write in the series?

When I started Miserere, I knew I wanted to do a total of four novels in Woerld—one for each season. I started in autumn, because that is really my favorite time of year.The second novel, Dolorosa, is really going to be more about Rachael than Lucian and will begin almost immediately where Miserere left off.Bellum Dei will be set in the spring and will be more about Lindsay. The fourth novel (as yet untitled) will be the culmination of the first three. I’ve only got the sketchiest ideas about the fourth novel right now, but as I write each one, the next one in the sequence becomes clearer. 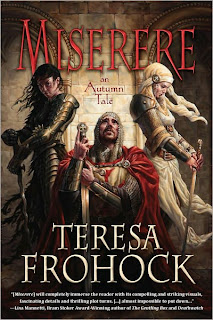 For a reader just starting to dip their toes into the fantasy pool, what books would you recommend (besides Miserere, of course)?

Wow. There is no easy way to answer that. There are so many wonderful fantasies out there and it just depends on what people like to read. I think the variety today is just marvelous: there are mysteries, romance, dark fantasy that borders on horror, epic fantasies … you’re limited by your imagination and your pocketbook.I’d say get out there and read the book bloggers and see what they’re saying. If you click enough links, you’ll find a blogger who has similar interests and tastes and see what they recommend.Another good way to become introduced to new authors is through magazines: The Magazine of Fantasy and Science Fiction and Bull Spec are two that I recommend off the top of my head; although, there are a lot of others. There are simply too many web sites to mention.

Can you share something about yourself that not a lot of people know?

Not without the risk of jail time.

What’s the most daring thing you’ve ever done?

I’ll plead the Fifth here too. I used to be a very bad girl.

YES!I’m working on a brand new series with a new cast of characters. I’m really excited about The Garden.
The Garden is set during the summer of 1348 on the Iberian Peninsula. Guillermo Ramírez, a blacksmith conscripted into the King’s army, takes refuge in the ruined garden of an abandoned monastery only to find himself among magical creatures. An ancient daimon has trapped other men in the garden and forces them to build a temple from which she draws strength. She will break the barrier between her land of fey and the world of men unless Guillermo can solve the mystery of his past so he can forge the key that will lock Urraca from humanity forever.And there are two sets of lovers and gods and demons and men, oh, my!The Garden is much darker than Miserere, but I’m really enjoying the story.I’m also working on the synopsis for Dolorosa and starting the first chapters. I’ve never worked two projects at once, but since everyone seems to be enjoying Miserere, I’m looking forward to continuing the story of Lucian, Rachael, and Lindsay.

About the book: (from BN.com)

Exiled exorcist Lucian Negru deserted his lover in Hell in exchange for saving his sister Catarina’s soul, but Catarina doesn’t want salvation. She wants Lucian to help her fulfill her dark covenant with the Fallen Angels by using his power to open the Hell Gates. Catarina intends to lead the Fallen’s hordes out of Hell and into the parallel dimension of Woerld, Heaven’s frontline of defense between Earth and Hell. When Lucian refuses to help his sister, she imprisons and cripples him, but Lucian learns that Rachael, the lover he betrayed and abandoned in Hell, is dying from a demonic possession. Determined to rescue Rachael from the demon he unleashed on her soul, Lucian flees his sister, but Catarina’s wrath isn’t so easy to escape!