The Edinburgh Dead by Brian Ruckley 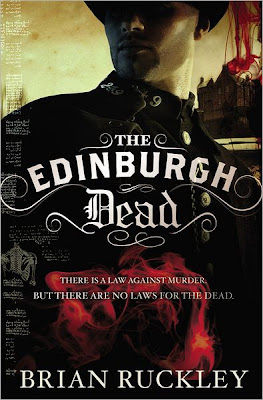 Synopsis (from Barnes and Noble)
Edinburgh: 1828
In the starkly-lit operating theaters of the city, grisly experiments are being carried out on corpses in the name of medical science. But elsewhere, there are those experimenting with more sinister forces.
Amongst the crowded, sprawling tenements of the labyrinthine Old Town, a body is found, its neck torn to pieces. Charged with investigating the murder is Adam Quire, Officer of the newly- formed Edinburgh Police. The trail will lead him into the deepest reaches of the city’s criminal underclass, and to the highest echelons of the filthy rich.
Soon Quire will discover that a darkness is crawling through this city of enlightenment – and no one is safe from its corruption.
The Edinburgh Dead is a powerful fusion of gothic horror, history, and the fantastical.

MY REVIEW
1828 Edinburgh is a fascinating place. New medical discoveries are being made every day, and art and science are held in high esteem. It’s a time of change and enlightenment, but there are also dark forces at work. Adam Quire struggles with his own darkness, as a veteran of the Napoleanic wars, and a survivor or countless battlefields. He’s seen plenty of death, but when he finds a body that looks like it’s been attacked by some sort of dog, his throat torn and ripped, Quire is pulled into an underworld of death and depravity that he never knew existed.
I enjoyed The Edinburgh Dead, although I don’t feel it was quite what it could have been. Adam Quire is certainly my kind of protagonist; a bit tortured, but strong of will and determined to see things right. I enjoyed accompanying him through the murky streets of Edinburgh as he followed the twisting trail of a group of killers involved in otherworldly evil. Quire soon finds out that some of the perpetrators of these crimes are members of elite society, and he knows that getting to the bottom of things may cost him his job. It also doesn’t help that his heart belongs to a prostitute, and he’s been known to enjoy more than a drink or two in his past. The Edinburgh Dead is atmospheric and full of dread, and when you add zombie hounds and reanimated corpses to the mix, it makes for quite a heady brew. I think maybe I would have liked to get into more detail with the villians and find out more about their motivations and the source of the evil that they’re using for their nefarious means. However, this was my only quibble, and I found the history of the Resurrectionists (body snatchers) and their methods of providing bodies for medical study fascinating. The author is a master at creating dread, and manages to ratchet up the tension with a sure hand. If you enjoy your historicals with plenty of suspense and a liberal dose of the supernatural, you’ll surely enjoy The Edinburgh Dead!

Visit the author at his website
**Purchase The Edinburgh Dead**
Amazon