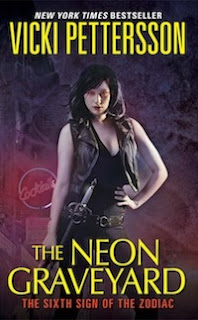 The Neon Graveyard (Signs of the Zodiac #6) by Vicki Pettersson

Once she was a soldier for the Light, the prophesied savior who would decide the outcome of the eternal conflict raging unseen in the dark corners of her glittering hometown. Now Joanna Archer is just another mortal—still born of an impossible union of Shadow and Light . . . still hunted by both—and carrying the unborn child of a lover held captive by a depraved demon goddess. Joining forces with a band of rogue Shadow agents, Joanna’s ready to storm the stronghold of her demonic foe, risking everything to enter this ghastly, godforsaken realm where the price of admission is her eternal soul. Because in a world that has stripped her of her power, identity, and fortune, Joanna has nothing left to lose—except her baby, her future, and the epic war poised to consume the city.

REVIEW
**Please note: I tried to keep this spoiler free, but it is book 6 in a series, so if you haven’t started the series yet, you may be scratching your head:)

Abandoned by her troop and her immortality, Joanna Archer is adrift in a sea of uncertainty. Formerly an agent of Light, she’s now joined with the Grey agents, hoping to reclaim her life, and her immortality. The Tulpa (Joanna’s father) is sending his agents into Midheaven, and nobody knows why. He just may be trying to gain control of the Kairos so he would be able to rule three worlds: mortal, supernatural, and the underworld. Joanna was once thought to be the Kairos (the perfect balance of light and dark), but that’s not the case, and now, Joanna must rescue Hunter from Midheaven, and the scheming, jealous Solange, his former lover. She must also keep the Tulpa from gaining control of the Kairos, and with it, wielding the ultimate power.

Ahhh, Midheaven, how you give me the creeps. Midheaven is one of the author’s best and yes, creepiest creations in these novels. In The Neon Graveyard we get to visit Midheaven with Joanna quite a bit. Poor Jo doesn’t get much of a break in this one, and is really put through the emotional and physical ringer this time. Butting heads with Solange is never fun, and Solange ain’t her purty self this time around. Oh no. We get to see her true face, and it’s icky, really icky. Think spider with its skin on inside out. See? Not pretty. Joanna also has her former troop leader, Warren, gunning for her, and he’s firmly riding the crazy train. Personally, I wanted to ring his neck and throw him off a cliff. She’s really got a knack for imagery, and this is no exception. If you’ve ever found yourself mesmerized by the stars, she’ll have you in the palm of her hand. We also get to spend some quality time at Master Comics in this one, and that’s always fun. After all, it’s the belief of the readers of the Troop Manuals that give our heroes their powers, and the loyalty of those readers is nothing short of phenomenal. Love and loyalty are very strong themes here, and if these novels have made you cry before (guilty), then this one will too. Joanna discovers some new powers and faces new tragedy, but there’s always a light in the darkness, and she never gives in to hopelessness. She’ll need all the hope, and help, that she can round up to face off against her greatest enemy: her father.

I hate to say more and spoil it for those still catching up with the series, but I can say you won’t be disappointed. For those that are just now discovering this splendid series, I envy you. I hope you love it as much as I have!

Read my interview with Vicki!
Visit Vicki at her website!