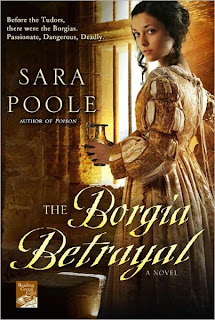 The Borgia Betrayal by Sara Poole

In the summer of 1493, Rodrigo Borgia, Alexander VI, has been pope for almost a year. Having played a crucial role in helping him ascend the chair of Saint Peter, Francesca, haunted by the shadows of her own past, is now charged with keeping him there. As court poisoner to the most notorious and dangerous family in Italy, this mistress of death faces a web of peril, intrigue, and deceit that threatens to extinguish the light of the Renaissance.

As dangers close in from every direction, Francesca conceives a desperate plan that puts her own life at risk and hurls her into a nightmare confrontation with a madman intent on destroying all she is pledged to protect. From the hidden crypts of fifteenth-century Rome to its teeming streets alive with sensuality, obsession, and treachery, Francesca must battle the demons of her own dark nature to unravel a plot to destroy the Borgias, seize control of Christendom, and plunge the world into eternal darkness.


MY REVIEW
Please note: This novel is 2nd in a series after Poison. I tried very hard not to include spoilers, but it does reference events in Poison.

The Borgia Betrayal takes place in 1493, the year after the events in Poison. Rodrigo Borgia is now Pope, and he keeps his poisoner, Francesca, very close, involving her in much more of his personal affairs than he used to. She’s still reeling from the events in Poison, knowing the mad priest Morozzi is still alive and well, and recognizes a darkness within herself that may put her soul in peril. However, she will do anything to prevent evil forces from claiming the lives of the ones she loves, and will do anything to avenge her father. When Francesca is attacked in her own home, and forced, once again, to kill, the stakes seem to get even higher!

I adored Poison, the first novel to chronicle Francesca’s adventures as Borgia’s poisoner, but The Borgia Betrayal is even better! Since the events of Poison, Francesca has become part of Lux, a very secret group seeking intellectual enlightenment in a time when the Inquisition was very active, and very real. When their secret meeting place is raided one day, and the group is forced to flee, Francesca suspects someone in Borgia’s inner circle, if not Borgia himself. Then there’s the matter of the mad priest Morozzi, still at large, but in whom Francesca sees the darkness that she hides within herself, but who she must find and kill, at any cost. Ms. Poole really amps up the intrigue in this one, and also the romantic tension. You’ll find yourself venturing into underground tunnels with Francesca and a group of smugglers that she enlists to help her in her cause, secret rooms, hidden lusts, and plots of revenge. Francesca gets steamy with Cesare, and is drawn to his darkness, but has real feelings for the glassmaker Rocco, and her heartache is palpable. We also get to spend more time with the now 13 year old Lucrezia, who agonizes over her impending nuptuals and confides to Francesca her innermost feelings. Their bond is very real, and I began to sympathize with Lucrezia as a girl on the cusp of womanhood who already has her fate decided for her. All this against a backdrop of possible war, and Francesca’s constant struggle to keep her Pope safe, as well as do his bidding. The title really says it all. Betrayal is the order of the day, and there are plenty of revelations and many twists and turns! I highly recommend this series to anyone that not only loves a good historical novel, but also fans of mystery, thrillers, and suspense!
Purchase The Borgia Betrayal:  Amazon