Paranormal Review: Taken by the Others by Jess Haines

Review: Taken by the Others by Jess Haines 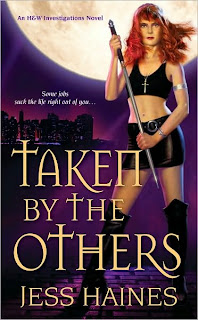 Synopsis (from Goodreads.com)
Once, New York P.I. Shiarra Waynest’s most pressing problem was keeping her agency afloat. Now she’s dealing with two dangerous, seductive vampires who have been enemies for centuries. The only thing Max Carlyle and Alec Royce agree on is that they both want Shia – for very different reasons. Max is determined to destroy Shia for killing his progeny, while Royce’s interest is a lot more personal. That’s not sitting well with Shia’s werewolf boyfriend, Chaz. As the feud between Max and Royce gets ever more deadly, a powerful vampire-hunting faction is urging Shia to join their side. Shia has always believed vamps were the bad guys, but she’s discovering unexpected shades of grey that are about to redefine her friends, her loyalties – and even her desires.

Shiarra is enjoying being a PI and hanging out with her werewolf boyfriend Chaz, when she finds out that Max Carlyle, a very powerful vamp, is gunning for her. He blames her for the death of one of his vamps, the treacherous Anastasia, and is determined to make her his own, or kill her. Good thing she’s contracted to the most powerful vamp in the city, Alec Royce, right? To make things worse, the leader of the White Hats want to bring Shiarra over to their side, no matter what. When Royce reveals that he plans to confront Max on his own, Shia’s having none of it, and she’s not the only one. The White Hats and Chaz want in on this action!

Shiarra is one of my fave urban fantasy heroines this year. She’s human, with no special powers of her own, so every decision she makes is based on that. However, she has a nifty weapons belt, created with mage magic, that contains the spirit of a dead hunter. When she wears the belt, she’s stronger, faster, and well, you get the point. She’s Shiarra 2.0! She’s slowly but surely coming to terms with the fact that dealing with the Others is her new way of life, and she’s come a long way from the Shia of Hunted by the Others. Getting kidnapped by Max Carlyle brings her in contact with Devon, a White Hat that starts to learn the same lesson that Shia has, that not all supes are slavering, raging beasts, and agrees to help the gang take down Max. Ms. Haines really ups the ante on Shia in this one. Max is a really, really nasty guy and things get pretty dark as we head into the second half of the novel. She also begins to view Alec quite differently and soon realizes that there may be more to him then she thought. Like I said, Chaz is also along for the ride, and the tension created between him and Royce is always entertaining and causes a lot of eyerolling on Shia’s part as she struggles with the contract she has with Royce, and the relationship that she’s trying to cultivate with Chaz. Like I said, Taken is quite a bit more violent than Hunted, and Shia is learning some hard truths about the direction her life has taken. Twists and turns abound, and Taken by the Others is a game changer for Shia, in more ways than one. Ms. Haines is definitely on her game with Taken, and I can’t wait to see what she has in store for us in Deceived by the Others!

Purchase Taken by the Others: Amazon