Poison (A Novel of the Renaissance) by Sara Poole 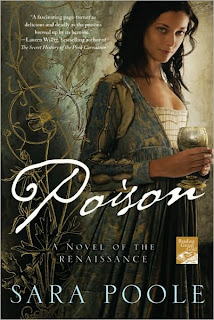 In the simmering hot summer of 1492, a monstrous evil is stirring within the Eternal City of Rome. The brutal murder of an alchemist sets off a desperate race to uncover the plot that threatens to extinguish the light of the Renaissance and plunge Europe back into medieval darkness.

Determined to avenge the killing of her father, Francesca Giordano defies all convention to claim for herself the position of poisoner serving Cardinal Rodrigo Borgia, head of the most notorious and dangerous family in Italy. She becomes the confidante of Lucrezia Borgia and the lover of Cesare Borgia. At the same time, she is drawn to the young renegade monk who yearns to save her life and her soul.

Navigating a web of treachery and deceit, Francesca pursues her father’s killer from the depths of Rome’s Jewish ghetto to the heights of the Vatican itself. In so doing, she sets the stage for the ultimate confrontation with ancient forces that will seek to use her darkest desires to achieve their own catastrophic ends..

Rome is in transition, with Christiandom on one side and those that seek intellectual enlightenment on the other. Alliances are constantly being made and broken and the future of an entire nation is at stake, and the Borgias tirelessly seek ways to advance their reach and power.

After the death of her father by nefarious means, Franscesca Giordano secures her place in the Borgia household by the only means she knows how. Ever pragmatic and logical, her job is to secure the safety of Cardinal Rodrigo Borgia and his family. Francesca is an anomaly in 1492 Rome. She is a woman of means, having inherited a sizable sum from her father after his death, and as the new poisoner, earns a rather comfortable salary of her own. When she learns about a plot designed to remove all Jews from the city by any means necessary, she is called upon to take the most dangerous of jobs: assassinate the Pope.

Poison was a really nice break from the supernatural realm. Don’t get me wrong, that genre remains my favorite, but every now and then I really enjoy some good historical suspense. Francesca is a strong and stalwart girl, thrust into circumstances that would break a lesser person, man or woman. The Borgias are certainly an interesting lot, and if you enjoy intrigue, they’re the family to follow. They’re like the Gottis of the 15th century. Following Francesca is great fun, and quite the harrowing adventure, and the story covers all manner of controversy, such as the Christian’s treatment of the Jews, medical practices of the time, torture, and of course, all of the “court” intrigue that you can handle. I really enjoyed getting to know the 12 year old Lucretia Borgia, and Francesca’s dalliances with Papa Borgia’s handsome son Cesare and Rocco, a handsome glassmaker, added some romance to the story. Francesca will discover astonishing secrets of the Borgia’s as well as some revelatory secrets about her own father. Sara Poole’s narrative is sharp and engaging, and the story moves along at quite a rapid pace. Ms. Poole doesn’t bog you down with lots of info at once. She instead weaves it into the narration (told from Francesca’s first person POV), resulting in relatively seamless reading. Il Cardinal (Papa Borgia and Francesca’s employer), is a scary, powerful guy, but the Pope is just plain creepy, and more than a little insane. He bleeds young boys and drinks their blood, thinking this will prolong his life. Yeah, yuck. With his icky habits, strange (and gross) proclivities, and visions of genocide, the idea of assassination seems to be a smart idea all the way around. The problem is getting close enough to the Pope to do it, and that’s where Poison really takes off. Poison is a rich, captivating look into a world on the brink of great change and a mystery that will keep you turning the pages late into the night.