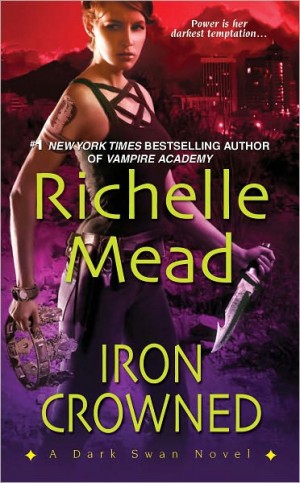 Shaman-for-hire Eugenie Markham is the best at banishing entities trespassing in the mortal realm. But as the Thorn Land’s queen, she’s fast running out of ways to end the brutal war devastating her kingdom. Her only hope: the Iron Crown, a legendary object even the most powerful gentry fear. . .

Who Eugenie can trust is the hardest part. Fairy king Dorian has his own agenda for aiding her search. And Kiyo, her shape-shifter ex-boyfriend, has every reason to betray her along the way. To control the Crown’s ever-consuming powers, Eugenie will have to confront an unimaginable temptation–one that will put her soul and the fate of two worlds in mortal peril. . .

REVIEW
The Otherworld lands are at war, and the fighting must stop, so what’s a Thorn Queen to do? When a seer tells Eugenie that she must go on a quest to find the Iron Crown, Eugenie is skeptical. The Iron Crown, she is told, is a very powerful symbol for its wearer, and could help bring peace to the kingdoms. When Eugenie presents this option to Dorian, he encourages her to get the crown. The only problem is, Dorian can’t travel with her, since she’ll have to journey through lands heavy with iron. Guess who can go with her? Did you guess Kiyo? Her ex, Kiyo? If you did, you’d be right. Oh, Kiyo, you wily little fox. You have a talent for coming back into Eugenie’s life at such pivotal times, don’t you? See, Eugenie finds out that Dorian might not have been totally honest about the power that the crown has. Uh oh. That’s not good, especially since Eugenie is on this quest with Kiyo, who she still finds sexy, and desirable, and well, you get the picture… This is a hard one for me. Kiyo irritates me. Yes, he’s a cutie, and super foxy (hehe, couldn’t help it), and is hot for Eugenie. He is however, somewhat a wet noodle in the boyfriend department. He just lacks a certain something. Most irritating is his propensity to run off to report to Maiwenn at every opportunity. If I had to pick, it would be Dorian: powerful, arrogant, masculine Dorian. We’d have to work on the kinky sex, but like I said, between the two, he’d have to be my pick. But I digress… Eugenie’s got some hard decisions to make (pun not intended). Not only about her love life, but about her role as Thorn Queen, which is getting harder and harder to maintain. She’s got to make a move, and it’s got to be soon, or land will suffer and people will die.

I love this series, and Book #3 kept me just as riveted as the first two. Richelle Mead has a knack for drama (of the best sort),and this one will keep you up past your bedtime. Yes, I wanted to shake Eugenie a couple of times. Trust me, if you’ve read it already, you know why, but she is human, and we’ve all done some silly things in the name of love. Besides, Eugenie kicks some serious ass in the magic department (she is the Storm King’s daughter after all), and her heart is always in the right place. My favorite minion, Volusian, gets some page time here, and his desire to kill Eugenie while being bound to serve her always makes for some amusing dialogue. Eugenie’s sister Jasmine seems to be mellowing out a bit, and they make some headway in their relationship, which is heartening, and I hope we’ll see Eugenie’s stepdad, Roland, softening toward her soon. Iron Crowned is a game changer, though, folks, and there were moments that I had to pick my jaw up off the floor. This one will definitely wow you, and you’ll be breathlessly awaiting the next installment! I know I am!