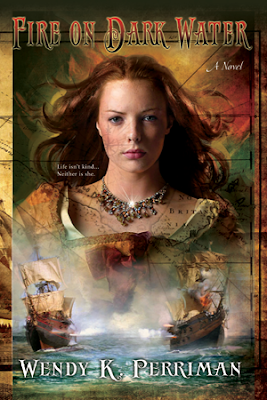 Born a despised gypsy and tricked into a life of brutal debauchery, Lola Blaise quickly learns the harsh ways of the world, and of the men who inhabit it. But in the New World waits a different sort of life, full of danger and passion, where one false move could mean death: a life of piracy.


On the island of Nassau, Lola earns her keep as a prostitute until she lands a place on the Revenge, a ship captained by the infamous Blackbeard, the greatest buccaneer who ever lived. To survive the lethal treachery of a pirate’s life Lola must use every hard-earned skill in her arsenal-and become the woman she was always meant to be.


MY REVIEW
Fire on Dark Water begins in 1702 England, when 10 year old Lola Blaise is spirited away from her gypsy family by people that would sell her to men wanting to “experience” a virgin. Yeah, the world Lola lives in is nasty, brutal, and unforgiving, especially where gypsies are concerned. Lola eventually falls in with a gang of thieves and is eventually caught and sent to Newgate, where she is banished to America for 7 years to be retrained for colonial labor. On the ship, she’s befriended by three doxies, Violet, Maude, and Dollie, who do their best to shelter her from the bullying and abuse by the other prisoners. They can’t save her from the captain, however, who turns Lola into his own personal form of entertainment. After a mutiny attempt by the prisoners goes wrong, and it’s discovered that Lola helped procure a weapon, the ringleaders are promptly tortured and thrown overboard, while Lola is forced to watch. Lola then helps take care of prisoners and shipman afflicted by various forms of nastiness. So, after what I personally think of as the “Ship Ride from Hell”, Lola is sold into service to a family in Carolina that lost their previous housekeeper to fever. Lola is to help with all manner of medical emergencies on the plantation, and is determined to make the best of this situation. Such begins Lola’s experiences in the service of the girl who would eventually become Anne Bonny and her father. A fateful marriage will lead her to the West Indies, life on the high seas, and eventually, Lola would become Blackbeard’s thirteenth wife.


Fire On Dark Water is not a mystery, nor is there an epic quest. It’s about a gypsy girl, abandoned and adrift, making her way in a hostile, unforgiving world. Lola’s voice is sturdy and unapologetic, even when she describes some of the horrible things she must submit to in order to survive. I had to keep reminding myself during the first part of this book, that Lola was only ten because the things she has to endure will make your heart ache. These are things no person; man, woman, or child should ever have to go through and is a glimpse into the dark hearts of men, and women. It was use or be used, and Lola clawed for her place the best she knew how. Intelligent, cunning, and resourceful, Lola survives in a world that most of us wouldn’t last more than 10 minutes in. The author creates a world rich in treachery and desire, and Lola Blaise’s story is one you won’t want to miss. If you like pirates, strong, intelligent women, and historic adventure that doesn’t let up, you’ll love Fire On Dark Water.

| Barnes and Noble
Visit the author at her website
Read my interview with Wendy K. Perriman