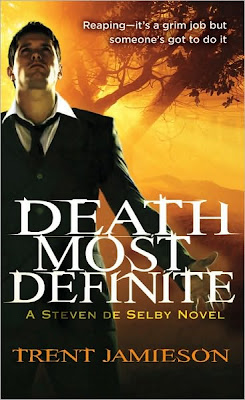 Synopsis (from Barnes and Noble)
Steven de Selby has a hangover. Bright lights, loud noise, and lots of exercise are the last thing he wants. But that’s exactly what he gets when someone starts shooting at him.Steven is no stranger to death-Mr. D’s his boss after all-but when a dead girl saves him from sharing her fate, he finds himself on the wrong end of the barrel. His job is to guide the restless dead to the underworld but now his clients are his own colleagues, friends, and family.Mr. D’s gone missing and with no one in charge, the dead start to rise, the living are hunted, and the whole city teeters on the brink of a regional apocalypse-unless Steven can shake his hangover, not fall for the dead girl, and find out what happened to his boss- that is, Death himself.


MY REVIEW
It’s been a bad day for Steven de Selby. He has a hangover from a night of drinking with his cousin, and best friend, Tim, a dead girl is following him around (who he might actually be falling in love with), someone is killing his co-workers, and there’s already been an attempt on his life. Steven is a Pomp, or a Psychopomp, working for the family business (Mortmax), drawing the souls of the newly dead through to the Underworld. He’s been living quietly with his border collie, Molly, and moping over a break up that happened nearly 3 years ago, when all hell seems to break loose at once. His Regional Manager is missing, and Morrigan, family friend and higher up at Mortmax, can barely contain the sudden violence. Steven suspects that Stirrers are involved, who pretty much do the same thing as Pomps, but hunger for both the living and the dead, creating pain and havoc wherever they strike. Losing his co-workers is bad enough, but when the violence hits very close to home, Steven vows to get to the bottom of things, before it’s too late for him too.
I’m a sucker for male protagonists (I like kick-ass chicks too, but this is a soft spot, k?), so when I started Death Most Definite, I was full of hope that I’d discover a new fave. Well, I have. Steven de Selby is everything I love in a male lead. He’s sensitive, kind, and a bit vulnerable. He doesn’t have a tortured past, and except for a rather bad run with women, there’s no serious angst that he’s dealing with when the you-know-what hits the fan. He’s just a (taller than usual) guy, doing the day to day in the family biz (albeit an odd family biz), and trying to catch a bit of happiness wherever he can. See, I get that (except for the guy part), and his humanity is part of what makes him so damn likeable. The author puts Steven though the emotional and physical wringer in this one, and it’s almost more than one man can handle. De Selby reminds me a bit of Jim Butcher’s Harry Dresden, but in Australia, instead of Chicago, and without as much of the snark , although there’s plenty of it for this snark fan. I thought the pacing was just about perfect, and I really enjoyed the little things, like the author’s references to 2001: A Space Odyssey, Firefly, and Mad Max. I love his world of inklings (tattoos that come to life), beautiful fig trees that ease the passing from life into death, and even zombies (of the non-brain-eating variety). Add car chases, explosions, some awesome twists, a chilling trip through the Underworld, and one of the funniest renderings of Charon I’ve ever read, and you’ve got a must read! I’ll definitely be back for more with Managing Death, book 2 in the Death Works series.

| Barnes and Noble
Visit the author at his website