Review: Blood of the Wicked (Dark Mission #1) by Karina Cooper 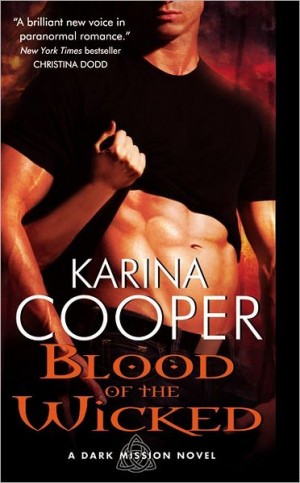 4/5
Kind thanks to Avon for providing a review copy

When the world went straight to hell, humanity needed a scapegoat to judge, to blame . . . to burn.

As an independent witch living off the grid, Jessie Leigh has spent her life running, trying to blend in among the faceless drudges in the rebuilt city. She thought she was finally safe, but now she’s been found in a New Seattle strip club—by a hard-eyed man on a mission to destroy her kind.

A soldier of the Holy Order, Silas Smith believes in the cause: trawling the fringes of society for the murderous witches who threaten what’s left of the world. Forced into a twisting web of half-truths and lies, he has to stay close to the most sensuous and electrifying woman he has ever seen and manipulate her into leading him to the witch he has to kill: her brother. Silas doesn’t know that Jessie’s his enemy, only that he wants her, needs her, even as he lies to her . . . and must protect her until his final breath.

REVIEW
Silas Smith, and agent of the Holy Order, is looking for Jessie Leigh’s brother Caleb, who is at the top of the Witches to Be Executed for Crimes Against Humanity list. Not a list I’d want to be on. I’m just sayin’. Jessie’s on the run and has no intentions of being captured by the Order. Caleb vanished a year before, leaving everything and everyone behind, and Jessie hasn’t seen him since. When Agent Smith eventually tracks Jessie down, he can’t deny his attraction to her. Agent Smith is a witch hunter, and Jessie is a witch, so why in the heck is she so attracted to him too? It’s definitely not a match made in heaven, especially since if Silas knew Jessie was a witch, there would be hell to pay. Jessie can’t believe Caleb could be involved in the brutal murders that the Order has been tracking, and will do anything to protect her brother. It’s a race against time for Jessie and Silas to find the truth, because a prophecy has foreseen Jessie’s death, and her secret may get her killed.

I loved Blood of the Wicked. It’s categorized as Paranormal Romance, and there are certainly some steamy scenes (very steamy), but the action takes front and center, and I really enjoyed the author’s rendering of a post apocalyptic Seattle. Seattle has been built up in layers since earthquakes, tsunamis, fires, and all manner of “natural” disaster, supposedly caused by witches, nearly destroyed the earth. Humans have rebuilt, but vast wastelands still remain, and the lower levels of Seattle remain full of danger. Ms. Cooper provided just enough world building to whet the appetite, but she has plenty of material to mine in future novels. Jessie is smart and tough, but is still very vulnerable from years of living off the grid to avoid persecution. Silas is a perfect foil, an agent passed his prime, certain this will be his last mission, and doing his best to avoid the undeniable feelings that he has for Jessie. I loved his single minded dedication to the mission, and also to protecting Jessie. Fans of urban fantasy as well as paranormal romance will love this exciting new series, and Ms. Cooper’s writing is not for the faint of heart. There was a lot to love for this very reluctant paranormal romance reader, and Karina Cooper paints a gritty, violent picture of the future, which I’ll look forward to returning to again and again!

Purchase Blood of the Wicked: Amazon