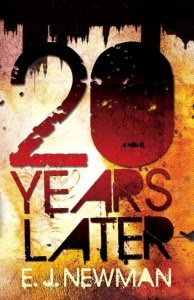 Synopsis (from Barnes and Noble)

LONDON, 2012: It arrives and with that the world is changed into an unending graveyard littered with the bones, wreckage, and memories of a dead past, gone forever.
LONDON, 2032: Twenty years later, out of the ashes, a new world begins to rise, a place ruled by both loyalty and fear, and where the quest to be the first to regain lost knowledge is an ongoing battle for power. A place where laws are made and enforced by roving gangs-the Bloomsbury Boys, the Gardners, the Red Lady’s Gang-who rule the streets and will do anything to protect their own.
THE FOUR: Zane, Titus, Erin, Eve. Living in this new world, they discover that they have abilities never before seen. And little do they know that as they search post-apocalyptic London for Titus’ kidnapped sister that they’ll uncover the secret of It, and bring about a reckoning with the forces that almost destroyed all of humanity.

20 Years Later takes place in a London devastated by an unknown horror 20 years earlier, an event referred to only as It. Ruled by roving gangs, fear and fights over territory are rampant, and killing is a daily event. 15 year old Zane and his mother Miri, have carved out an existence as healers, with no alliances with the gangs, and tolerated mostly for their healing abilities. When the Red Lady places them in her sights, however, things begin to change. Zane then meets Erin and Titus, and sets out on an adventure that will changes his entire world and lead to revelations about the event that left the world in shambles.
20 Years Later is an diverting look at a post-apocalyptic world, seen through the eyes of teens. The London setting is suitably creepy, and Ms. Newman populates the novel with an interesting cast of characters. I enjoyed getting to know each character, but developed a soft spot for Erin, the daughter of a warrior in service to the Red Lady. Ahh, the Red Lady: so beautiful, so deadly, and Zane has got the hots for her, so much so that you kind of want to slap him, but he’s a teenager, and the Red Lady is quite lovely, but it still frustrated me at times. Sometimes good sense was ignored in favor of teenage hormones, but that’s to be expected. I particularly enjoyed their trips into the abandoned hospital, which they’re told not to go under any circumstances, but really, teenagers are curious by nature, and the surest way to get them to do something is to tell them not to. Each teen has their own agenda. For example, Zane is determined to find out the truth about his father and Titus is committed to finding his missing sister, Lyssa. I would have liked to find out more about “It”, the incident that caused the collapse of society, but I’m confident we’ll learn more about that in the next book, since this is to be a trilogy. 20 Years Later is firmly a Young Adult novel, with a few flaws, but engaging, and I would most definitely recommend it to reluctant readers. Ms. Newman is certainly an author to watch!
Pre-Order 20 Years Later (print)  Amazon