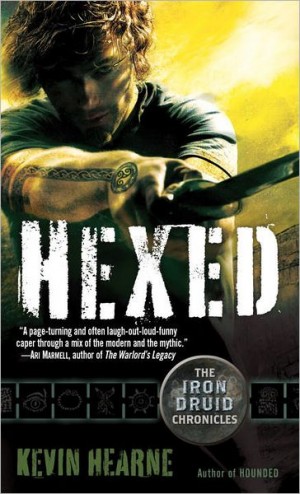 Synopsis:
Atticus O’Sullivan, last of the Druids, doesn’t care much for witches. Still, he’s about to make nice with the local coven by signing a mutually beneficial nonaggression treaty—when suddenly the witch population in modern-day Tempe, Arizona, quadruples overnight. And the new girls are not just bad, they’re badasses with a dark history on the German side of World War II.With a fallen angel feasting on local high school students, a horde of Bacchants blowing in from Vegas with their special brand of deadly decadence, and a dangerously sexy Celtic goddess of fire vying for his attention, Atticus is having trouble scheduling the witch hunt. But aided by his magical sword, his neighbor’s rocket-propelled grenade launcher, and his vampire attorney, Atticus is ready to sweep the town and show the witchy women they picked the wrong Druid to hex.
REVIEW
Poor Atticus. After the epic battle in Hounded, he just wants to train his new apprentice and tend his Druid grove in peace, but it’s just not in the cards. He’s still cleaning up the demon mess left behind by that battle, and that’s not all. Atticus is asked, by the local witch coven, to take down a group of Bacchants that threaten to turn their patch of Arizona into a seething den of iniquity. He’s also got his Viking vamp lawyer trying to convince him to take down Thor, which he absolutely does not want to get involved with. Then there’s that feisty (and nasty) coven of German witches, and they’re out for his blood…

Hexed is just as awesome as Hounded, and some of my favorite characters are back, and getting lots more play! For example, my favorite Viking vamp Leif is enlisted to help Atticus and the Sisters of the Three Auroras fight that coven of German witches I mentioned earlier. This particular showdown is like the O.K. Corral, but with a Druid, witches, a vamp, golems, goat headed demons, and RPGs. Seriously, RPGs folks! My favorite Irish wolfhound, Oberon, is back and better than ever (I seriously love this dog), and we get a rather memorable visit by the Morrigan (remember the Morrigan?), and get to see her, um, softer side. Yes, the softer side of a death goddess is just as entertaining as it sounds. We also get to spend a bit of quality time with the lovely Brighid, which is always a singular treat! Mr. Hearne’s writing is fast paced and spot on, and really, if you’re like me, you’ll have quite a bit of trouble putting this down in order to get other things done. Like, you know, eating and stuff. Hexed is steeped in magic and wrapped in awesome. It really doesn’t get much better than this!
Purchase Hexed: Amazon