Today I’ve got the super talented Carrie Vaughn on the blog! Carrie is the author of the Kitty Norville urban fantasy series, and much more! Also up for grabs is an ARC of Kitty’s Greatest Hits, so be sure to see giveaway details at the bottom of this post!

Don’t forget to check out the My Favorite Things Event Schedule to see what’s going on here and at Candace’s Book Blog! 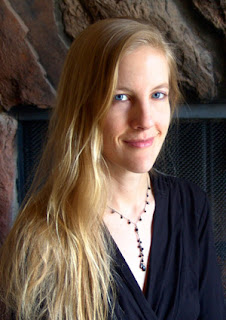 Carrie, I’m such a huge fan and am so thrilled to have you on the blog!

Thanks for inviting me!

It seems you were destined to become a writer, considering your upbringing and schooling! Do you remember the first story you ever wrote?

Yes. It was a second grade class assignment — just write a story. Mine was “Sally the Horse,” which was basically a Walter Farley/Marguerite Henry mash up with feminist undertones. It was three pages of that cheap grade-school paper, and the teacher was very impressed. So I got the bug early.

What’s your most embarrassing childhood memory?

I don’t even want to go there, there are so many to choose from.

When I first discovered your Kitty series, I remember thinking that this is what great urban fantasy is all about! Are you anything like Kitty?

People who only know me a little bit say I am, and people who know me very well say I’m not. So we may be superficially similar, but I don’t think we’re really much alike. She’s much more outgoing and brazen than I am. More impulsive. I’m actually pretty shy and restrained.

If Kitty’s adventures ever make it to the big screen (fingers crossed), who could you picture playing her? And Ben…and Cormac….?

I’ve kind of stopped thinking about it, because there are so many actors to choose from. I’m not actually all that familiar with actors of the right age to play them. I used to pick Kristen Bell for Kitty, but I’m not so sure anymore. Or Renee Zellweger from 12 years ago. See, in my brain I have a time machine and cast from across time and space, which you can’t do in the real world. I like Michael Rosenbaum a whole lot and think he’d make a good Cormac.

Name something that makes you laugh out loud.

The Pixar short “For the Birds”

There’s quite a comprehensive list of favorite authors on your web bio, how about favorite movies?

What’s the best advice you’ve ever received about writing?

I’ve got a bunch of stuff coming out this year. Kitty’s Big Trouble, the ninth in the series, is due out in late June, and the Kitty short story collection, Kitty’s Greatest Hits, is due out in August. This has a brand-new novella about Cormac, and what he was doing while he was off stage in the books. I’m excited for people to read it.

GIVEAWAY DETAILS
*Giveaway is for one copy (ARC) of Kitty’s Greatest Hits by Carrie Vaughn. 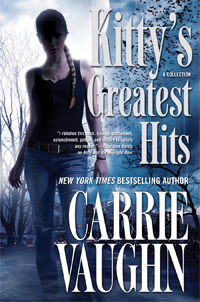 About the book:
The first-ever story collection from the “New York Times “bestselling author, including two all-new works
Kitty Norville, star of a “New York Times “bestselling series, is everybody’s favorite werewolf DJ and out-of-the-closet supernatural creature. Over the course of eight books she’s fought evil vampires, were-creatures, and some serious black magic. She’s done it all with a sharp wit and the help of a memorable cast of werewolf hunters, psychics, and if-notgood- then-neutral vampires by her side. “Kitty’s Greatest Hits “not only gives readers some of Kitty’s further adventures, it offers longtime fans a window into the origins of some of their favorite characters.
In “Conquistador de la Noche,” we learn the origin story of Denver’s Master vampire, Rick; with “Wild Ride,” we find out how Kitty’s friend T.J. became a werewolf; and in “Life is the Teacher,” we revisit Emma, the human-turned-unwilling-vampire who serves the aloof vampire Master of Washington, D.C.
This entertaining collection includes two brand-new works: “You’re On the Air,” about one of Kitty’s callers after he hangs up the phone; and the eagerly awaited “Long Time Waiting,” the novella that finally reveals just what happened to Cormac in prison, something every Kitty fan wants to know.