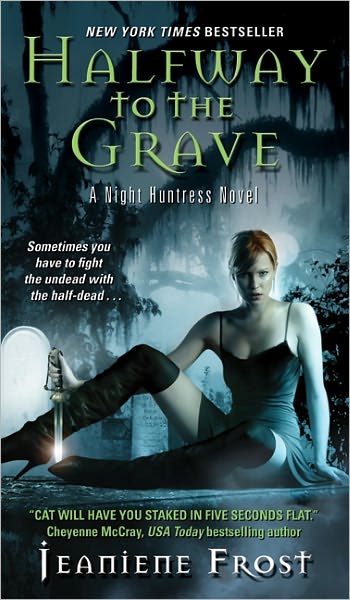 Today on the blog,my PIC, Chelsea (mistress of Vampire Book Club) is here to talk about why she loves Jeaniene Frost’s Night Huntress series, and also offer up Book 1, Halfway to the Grave, to one lucky winner (see giveaway details at the end of the post!)


My Favorite Things: The dark and funny Night Huntress series
by Chelsea of Vampire Book Club

I’ve been told by a friend or two I tend to lead into my favorite books by saying one of two things: either “the heroine is just badass” or “it’s really dark, but I swear you’ll still laugh out loud.” This tells you a few things about my reading habits, but it also explains why authors like Jeaniene Frost, Kim Harrison, and Stacia Kane are among my top recommended.


Frost, in particular, has a gift for giving me a no-holds-barred heroine, punchy dialogue and a realistic romance, to boot.

Cat Crawfield, Frost’s heroine in the Night Huntress series, has some major self-identity issues in the first book Halfway to the Grave because she’s half-vampire. It’s not some schmaltzy or obvious “ I can’t decide about drinking blood” issue. No, Cat is the product of a rape. Her vampire father raped her human mother. This means our heroine has grown up hating that part of her. The part that makes her strong, that makes her fast, that keeps her healthy. That part is seen as evil. And to combat it – and try to please her mom – Cat hunts and kills vampires.


“One corpse, extra crispy! Do I hear a thousand dollars?”

Then she meets Bones. This vampire has lived for centuries, and just happens to be a mercenary of sorts. He, too, slays vampires. And Cat’s going to help him, whether she likes it or not.


But after that brutal training, Cat’s comes to rather enjoy practice. This is what happens when one of Bone’s old friends arrives:

“Okay, you’re a big bad vampire who’s gonna rip my throat out, right? You see I’m armed — with steel, by the way, since this is a demonstration and I don’t want you to end up smelly — and you don’t care because you’re all that and I’m just an artery in a dress. If you get a mouth on my throat, you win, but if I plug your heart first, I do.”

Spade’s eyes slide to Bones. “Is she joking?”

Bones cracked his knuckles and stepped aside. “Not at all.”

“Dinner’s getting cold,” I taunted him. “Come and get me, bloodsucker.”

Spade laughed — and then feinted right before leaping at me with blurring speed. He was a breath away when he looked down in surprise.”Well, strike me pink!” he said, pulling himself up in midtackle.

“I don’t know what that means, but okay.”

Two steel blades were in his chest… 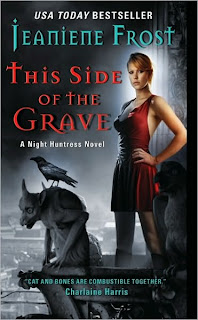 By the end you see how important the brutal parts were to the growth of the characters. Eventually in Halfway to the Grave there is a romantic angle to the Cat and Bones relationship, but without the pain and the humor early on, she would never have been ready to accept the love of a vampire. Or even think about accepting herself.


And because most of the jokes in the book work best in context, I’ll give you one more that’s funnier out of context:“Droolers Anonymous. I’m on Step One in my membership. Admitting that I’m powerless over my slobbering and my life has become unmanageable.”