Horror Early Review: My Life As A White Trash Zombie by Diana Rowland

Early Review: My Life As A White Trash Zombie by Diana Rowland 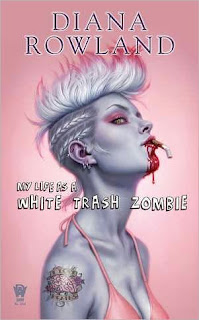 My Life As A White Trash Zombie by Diana Rowland

Publisher: DAW (Penguin Books)
Release Date: July 5th, 2011
Source: From publisher for review
Urban Fantasy/Zombies/Mystery
Synopsis (from Barnes and Noble)
Teenage delinquent Angel Crawford lives with her redneck father in the swamps of southern Louisiana. She’s a high school dropout, addicted to drugs and alcohol, and has a police record a mile long. But when she’s made into a zombie after a car crash, her addictions disappear, except for her all-consuming need to stay “alive”…

Diana Rowland is awesome. She managed to take an emotionally damaged, drug addicted,slacker, down on her luck, high school dropout bum, and make me love her. Angel Crawford is the product of a mentally ill mother who committed suicide when she was young, and an alcoholic father that blames Angel for her mother’s loss. They live in a ramshackle house in the Louisiana swamp, where hopelessness prevails and a miasma of despair creeps like fog into every corner of their lives. When the book opens, Angel is awakening in the hospital with visions of twisted metal and blood filling her memory. The only thing is, she doesn’t have a mark on her, and when she’s told that she was found naked on the side of the road, she can only imagine that an accidental overdose was to blame. A note from a stranger informs her that she has a job waiting for her driving the coroner’s van, and she must hold the job for a month. Angel figures she’s been given a second chance by a Good Samaritan, and decides to just ride it out. What she didn’t count on is the sudden, all consuming craving for human brains…

This book is so much fun, and it’s so much more than what it seems to be on the surface. Angel is such a broken girl, and dealing with her alcoholic father and her stagnating life has resulted in nearly non-existent self esteem. The job with the coroner, which at first seems like a means to an end, becomes a lifeline for Angel, in more ways than one. First is the obvious: Angel needs human brains to survive or she will begin rotting away (seriously, pieces will start falling off). What’s most surprising to Angel is the camaraderie with her coworkers and the self worth that begins rebuilding piece by piece. The stress keeps piling on though, because someone is cutting a swath through her town, lopping off heads and taking names. Is it a serial killer, or something else? The mystery rounds out what is essentially Angel’s story, and I had a really hard time putting this one down. You’ve got to have a bit of a strong stomach for this one though, because, well, Angel assists with autopsies and eats brains, and the author gets rather descriptive. I had to really twist my way of thinking, because Angel is pretty much like a vampire, except if she eats your brain, you’re not gonna be alive to get all romantic about it. Being a zombie ain’t pretty, but Angel handles a very extreme circumstance with her rough grace and a heart of gold, and we get to watch her change from a girl on the skids, to a capable, strong, well…zombie. This was one of the most unusual books I’ve read, and I can’t wait to get to know Angel even more!
Purchase  My Life As A White Trash Zombie: Amazon