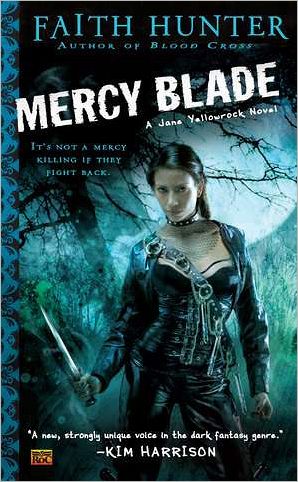 Kind thanks to Roc for providing a review copy

Jane Yellowrock, a shape-shifting rogue-vampire hunter-for-hire, is now taking blood money from the very vamps she used to hunt. But things start heating up in the Big Easy when weres announce their existence to the world, and revive the bitter tensions that run between them and their old enemies — vampires. Jane finds herself caught in the crossfire.

REVIEW (Please note: This review is relatively spoiler free, but assumes you’ve read the first 2 in the series…)
Faith Hunter is so cool, and I can’t get enough of this series! Each time a new Jane Yellowrock book comes out, I have to fight the urge to drop what I’m reading and dig in. So far, each book has been better than the last, and currently, Ms. Hunter is three for three. Gushing aside, fans of early Anita Blake and The Hollows series should eat these up. Faith Hunter manages to weave magic, skinwalker lore, romance, weres, and a heaping helping of vamp politics with the storied history of a supernaturally infused New Orleans. Her lush descriptions of New Orleans sights, sounds, and smells only enhance Jane’s story and pulls you right it. I swear, the air is getting humid just thinking about it! For those not familiar with the series, Jane Yellowrock is a skinwalker, able to shift into various animal forms, although her main form is of the big cat variety, and shares consciousness with the animal that she calls Beast. Jane is also a PI and licensed rogue vamp hunter, mainly in the employ of the New Orleans MOC (Master of the City), Leo Pellisier. She has been tasked with handling security for Leo and his vamps while welcoming a group of weres to the city that have recently “come out” to the world. Vamps have been “out” for awhile, and Leo and Co. hope to create a peaceful accord with the big cats. Things seem to be going somewhat smoothly until a group of werewolves crash the party and all hell breaks loose, and a new guy is in town, claiming to be Leo’s Mercy Blade.

Poor Jane can’t seem to get a break. In addition to this massive security breach, her new lover and undercover cop, Rick LeFleur has gone missing while undercover, and Jane is asked by a colleague of his to track him down. All of this while fighting an ongoing attraction to Leo’s blood servant, the super hot “Bruiser”, who’s most definitely out to claim Jane as his own. Jane has a propensity for nicknaming certain individuals, and it’s just one of the things I love about this strong and fascinating heroine. The novels are told from Jane’s point of view and I always enjoy Beast’s POV when she’s in animal form. The author deftly juggles multiple story lines, without ever becoming confusing, and her action scenes are top notch. If you haven’t yet discovered this wonderful series, you’re in for a treat!