Review: Halfway to the Grave (Night Huntress #1) by Jeaniene Frost 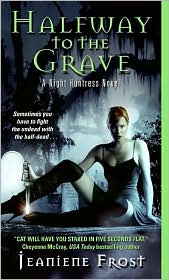 Halfway to the Grave (Night Huntress #1) by Jeaniene Frost

Half-vampire Catherine Crawfield is going after the undead with a vengeance, hoping that one of these deadbeats is her father—the one responsible for ruining her mother’s life. Then she’s captured by Bones, a vampire bounty hunter, and is forced into an unholy partnership.


In exchange for finding her father, Cat agrees to train with the sexy night stalker until her battle reflexes are as sharp as his fangs. She’s amazed she doesn’t end up as his dinner—are there actually good vampires? Pretty soon Bones will have her convinced that being half-dead doesn’t have to be all bad. But before she can enjoy her newfound status as kick-ass demon hunter, Cat and Bones are pursued by a group of killers. Now Cat will have to choose a side . . . and Bones is turning out to be as tempting as any man with a heartbeat.

Cat Crawfield is a 22 year old half-vamp that spends her nights killing sleazy vamps after picking them up in bars. Not really an existence any proper 22 year old girl should have, but the time she spends killing these vamps is also time spent getting vengeance on the father that raped her mother, resulting in her birth, and half-vamp status. One night, Cat picks up the one vampire that could change her entire way of life, and may be her match, and more. Meet bounty hunter Bones, Brit by birth, vamp by way of Australia, 300 years old, and all kinds of sexy. After discovering Cat is half vamp, he makes her an offer she can’t refuse. Train with him, take down some nasty vamps, and live. Cat accepts, and soon learns that her life will never be the same.

I’m fairly sure I’m the only one on Planet Earth that is just now starting this series. Ok, that may be an exaggeration, but I do know how popular it is, and as I discovered,  for good reason! Halfway to the Grave was pretty much a thrill ride from start to finish, and I really enjoyed the world that Ms. Frost created. Cat irritated me at times, with her hesitancy to believe that not all vamps are bad, but Bones changes her mind on that one, and pretty quickly! Cat does begin to see that her way of thinking is maybe not the smartest way, but sometimes I wanted to shake her and tell her to open her eyes. This is a steamy read, but not overwhelmingly so, and moves very quickly toward an ending that will leave you breathless for more. Highly recommended for urban fantasy and paranormal romance fans alike!

Purchase Halfway to the Grave: Amazon