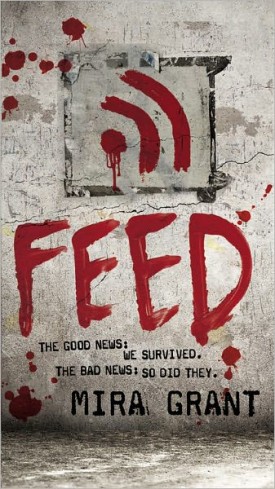 The year was 2014. We had cured cancer. We had beat the common cold. But in doing so we created something new, something terrible that no one could stop. The infection spread, virus blocks taking over bodies and minds with one, unstoppable command: FEED.

NOW, twenty years after the Rising, Georgia and Shaun Mason are on the trail of the biggest story of their lives-the dark conspiracy behind the infected. The truth will out, even if it kills them.

REVIEW
Feed follows bloggers (and adoptive sister and brother) Georgia and Shaun Mason (and their respective teams) over a period of time as they cover a pivotal presidential election in a postapocalyptic US. After a virus, Kellis-Amberlee (originally meant to cure the common cold),runs rampant throughout the world, the US has slowly but surely rebuilt, reclaiming most of the country. There are however, areas of the country that cannot be retaken, and are teeming with zombies, who’s sole mission is to devour and infect. As Georgia and Shaun cover the campaign trail, things begin going horribly wrong, and knowing who to trust is becoming harder and harder. When people start dying, things get really serious.

Feed takes place in a world where blood tests greet you at every entry and exit, and hard justice is meted out on a daily basis. People have had to conform to a reality that includes not only constant blood testing, but safety measures on a grand scale, and skin to skin contact is now at a bare minimum. Public gathering? Forget about it, unless the area has been cleared for just that purpose. Kellis-Amberlee is a nasty, nasty little virus, yet Georgia lives with it on a daily basis, since she has a form of retinal KA that makes normal vision impossible. Georgia is our guiding voice here, and her strength and conviction comes across on every page, as does her absolute loyalty to her brother. Georgia is the sensible, pragmatic one, while Shaun takes chances that any sane person would scoff at, and they keep the ratings coming. Adopted by parents who’s biological child was killed during the Rising, Georgia and Shaun have built an unshakeable trust and dependency on each other, and it’s sometimes heartbreaking in it’s intensity.

From page one, Feed grabs you by your neck, and refuses to let you go. The narrative is interspersed with snippets from each character’s blogs, and at times, the pace is frantic. Yes, it has zombies, and there are some truly, truly terrifying moments, but the true meat, so to speak, of this novel is in its depiction of how the media affects us in our daily lives, and how it can not only save lives, but destroy them as well. It will certainly make you think about how much we count on the news to not only keep us informed but tell us the truth, and how sometimes that’s not the case. Feed was one of those rare novels where I fell in love with the characters, and there were parts that absolutely broke my heart. I exclaimed out loud a few times, and was also moved to tears. Feed is a Hugo nominee for this year, and there’s good reason for that. The amount of research that went into this story is enormous, and the author’s attention to detail is impeccable. Feed is a raw, emotional, postapocalyptic masterpiece that will keep you glued to the pages. I implore you to make this one of your Must Reads this year. I promise you won’t regret it.