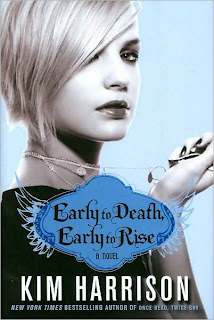 Synopsis:
Seventeen, dead, and in charge of heaven’s dark angels—all itching to kill someone.

Madison Avery’s dreams of ever fitting in at her new school died when she did. Especially since she was able to maintain the illusion of a body, deal with a pesky guardian angel, and oh yeah, bring the reaper who killed her to his untimely end. Not exactly in-crowd material. It’s amazing that her crush, Josh, doesn’t think she’s totally nuts.

Now Madison has learned that she’s the dark timekeeper, in charge of angels who follow the murky guidelines of fate. Never one to abide by the rules, she decides it’s time for a major change to the system. With the help of some unlikely allies, Madison forms a rogue group of reapers who definitely don’t adhere to the rules of the heavens.

But as she grapples with the terrifying new skills that come with being a timekeeper, Madison realizes she may not be prepared for what lies ahead—unless she gets some seriously divine intervention.

**I don’t think there are any spoilers here, but the review assumes you’ve read Once Dead, Twice Shy**

Madison is the new dark timekeeper. Her job is to save souls by taking a life before the person can choose the dark path. Madison, however, doesn’t believe in fate, she believes in choice, which goes against everything the dark reapers stand for. Barnabas switched sides to stay and help Madison, and she also has the help of the beautiful, dark angel Nikita, who is now her protector.. The problem is the seraphs aren’t too sure that Madison’s approach to reaping is the way to go, and she’ll have to prove herself. The only way she can do that is to get to the person first, before they are reaped and talk them into taking a different path. She sees her chance in her next scything, who (after a prank gone wrong) is fated to release a virus into the computer system of a hospital, causing multiple deaths. Unfortunately, everything is not what it seems, and with Madison’s unhoned timekeeping skills tripping her up, finding the real culprit is much easier said than done.

Honestly, I didn’t enjoy Early to Death as much I did Once Dead, Twice Shy (Madison Avery 1), but I did enjoy it! Madison’s guardian angel, Grace (and her hilarious limericks) is back, as well as Barnabus and Nikita, who is rapidly becoming one of my favorite characters. Nikita is a perfect specimen of beauty, yet her self consciousness and her desire to be liked and to fit in is endearing, as is her growing affection for Madison, who she’s sworn to protect. Josh, Madison’s (hopeful) love interest from book one is absent for most of this one, and it didn’t go unnoticed, so I’m hoping Ms. Harrison has some great plans for him in book 3. We also met the new Light Timekeeper apprentice, Paul, who looks to be a fun addition to the cast (and who may not be quite what he seems.) Madison still struggles with choice over fate, and her desire for choice gets increasingly harder when she sees just what the baddies are capable of. These books certainly do make you think about a human’s ability to change their ways and take the right path, and Ms. Harrison is on top of her writing game, as always. I’ll look forward to joining Madison and the gang again in Book 3, Something Deadly This Way Comes, out later this month.

“Light is for human choice,easily seen. Dark is for hidden seraph fate, no choice to glean”

| Barnes and Noble
Order  Something Deadly This Way Comes(Book 3): Amazon