Fantasy MFT: Interview and Giveaway with Susan and Clay Griffith

MFT: Interview and Giveaway with Susan and Clay Griffith 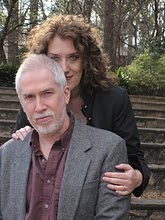 Susan and Clay Griffith are the uber talented authors of the Steampunk vampire tale The Greyfriar: Vampire Empire 1 and the upcoming Book 2: The Rift Walker! They’re here to kick off Steampunk Week and I couldn’t be more thrilled to have them on the blog!

*Also up for grabs is 3 copies of The Greyfriar to 3 lucky US winners!
Please see giveaway details at the bottom of the post!

Clay and Susan, welcome to the blog! You’ve been writing together for more than a decade. How did you discover that you made a great writing team, and can you tell us about some of your early projects?
We were both working on separate writing careers when Clay was contacted about a Disney project through Acclaim Comics. Clay is not an expert on Disney, but Susan is. So we collaborated and immediately saw the benefit of working together. We did Disney comics for Acclaim for a year or two, and decided to keep going as writing partners on other projects too.Many of our early collaborations were media tie-ins, which we love almost as much as doing our own stories and characters. We’ve worked on such great characters as The Tick, The Phantom, Kolchak the Night Stalker, Allan Quatermain, and many others in both prose and comics. 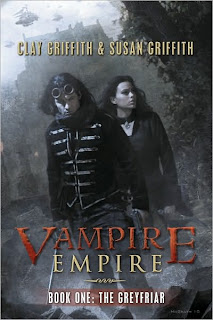 Your newest Steampunk/Vampire novel, The Greyfriar, took Vamp lore and handled it in a very unique way. I adored the book, and it’s gotten rave reviews! What made you decide to try your hand at Steampunk, and why do you think Steampunk is so popular?
To be honest, we didn’t start out to write a steampunk novel. We envisioned an alternate history novel, and the steampunk angle just happened naturally along the way as our fictional world developed. We wanted a certain feel to the book (i.e. the Victorian Era), and the natural consequences of the vampire conquest in our storyline created the conditions for the existence of Victorian technologies with a steampunk sensibility.It turns out steampunk has been around for a long time. It just didn’t have that name. We watched Wild Wild West on television and didn’t realize we were watching steampunk. There’s a certain appeal to taking a moment in time and tweaking it ever so slightly to see what could happen. The Victorian palate in steampunk has a great deal of appeal both socially and historically. It’s a period in history that a lot of people find fascinating. It’s distant enough to be strange, but modern enough to be familiar.
Is it a challenge to be married and work together?
It’s always a challenge to collaborate. Being married just complicates it a bit more, but it also sweetens it. Two people bringing their creative vision together can be a beautiful thing. Sure, we have our disagreements (as do any collaborators or married couples), but the trick is to compromise and try to understand why there is some contention. We want the very best for the novels and so we trust each other to argue on its behalf. Thankfully, we both bring slightly different skill-sets to the table, so the work can grow and improve with each layer we put on. Another benefit is that whenever there is an issue with writer’s block, it can be resolved almost instantaneous because you have a sounding board within immediate reach.
What is your writing process like, and how long does it usually take for you to complete a novel?
The hardest part of any collaboration process is the beginning and the end. Most of the early work is hashing out the idea and hammering it into something we both like. We spend weeks or months going over the big picture – themes, characters, world building, plot – until it’s all laid out in an outline (which is, of course, subject to change as we write). We divide up the outline, trying to play to each one’s strengths. The actual writing process is solitary, but we are always available for questions or problems. As we proceed, we hand chapters back and forth for the other person to edit and rewrite so we can create a single narrative voice. When we have a finished manuscript, we print out the whole thing, and we each go over a copy. Then we come together again to discuss changes, usually repeating that laborious process two or three times. Then it goes to our beta readers, and we make their changes, complete with more discussion and argument. And then off it goes to the editor. Easy! The time can vary. We have taken several years to complete a novel, and we have also completed books in less than a year. Sometimes that depends on whether we have a deadline and an editor tapping his foot waiting for it.
For each of you, what are some of your biggest literary influences? Do you have any contemporary favorites? 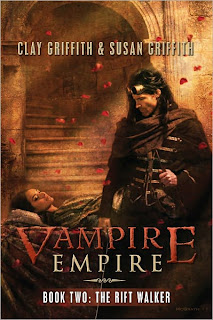 Susan grew up on pulp adventure. She lived in the same neighborhood as Walter Gibson, better known as Maxwell Grant the author of The Shadow. He was a large influence. Bernard Cornwell of the Sharpe series is another favorite, as well as George Mann and Elizabeth Peters.Clay is a horror guy. But in terms of influential books/writers, if he has to pick a few, it would be Stoker’s Dracula, Raymond Chandler, Graham Greene, Patrick O’Brian, and H. Rider Haggard.We are both huge fans of classic movies and comic books too.

When you’re not writing, what do the two of you like to do in your spare time?
We read, play World of Warcraft, and drink coffee at cafés. Occasionally we play with our cat when he’s in a social mood.
Is there any news that you can share on upcoming projects or events?
We expect two graphic novels to hit the stands this summer: Allan Quatermain and the Lord of Locusts and Ray Harryhausen Presents: It Came From Beneath the Sea…Again.And convention season has started so we will be popping up around the country. First off is the Steampunk World’s Fair in Somerset NJ (May 20 – 22) and then Book Expo America in New York City (May 24). We are also heading out to ComicCon in San Diego, CA (July 21-24). And we’ll top off the summer with the always exciting DragonCon in Atlanta, GA (Sept. 2-5) where we’ll have the official release of THE RIFT WALKER: VAMPIRE EMPIRE BOOK 2.

Visit the authors at their WEBSITE
Stalk them on: Twitter | Goodreads
Read my review of The Greyfriar

GIVEAWAY DETAILS
**GIVEAWAY IS NOW CLOSED**
About The Greyfriar:
In the year 1870, a horrible plague of vampires swept over the northern regions of the world. Millions of humans were killed outright. Millions more died of disease and famine due to the havoc that followed. Within two years, once-great cities were shrouded by the gray empire of the vampire clans. Human refugees fled south to the tropics because vampires could not tolerate the constant heat there. They brought technology and a feverish drive to reestablish their shattered societies of steam and iron amid the mosques of Alexandria, the torrid quietude of Panama, or the green temples of Malaya.

It is now 2020 and a bloody reckoning is coming.

Princess Adele is heir to the Empire of Equatoria, a remnant of the old tropical British Empire. She is quick with her wit as well as with a sword or gun. She is eager for an adventure before she settles into a life of duty and political marriage to a man she does not know. But her quest turns black when she becomes the target of a merciless vampire clan. Her only protector is the Greyfriar, a mysterious hero who fights the vampires from deep within their territory. Their dangerous relationship plays out against an approaching war to the death between humankind and the vampire clans.
The Greyfriar (Vampire Empire, Book 1) is the first book in a trilogy of high adventure and alternate history. Combining rousing pulp action with steampunk style, the Vampire Empire series brings epic political themes to life within a story of heartbreaking romance, sacrifice, and heroism.