Welcome to Day 5 of My Favorite Things: Steampunk Week!

Today on the blog I have the awesome Devon Monk, author of the Allie Beckstrom urban fantasy series and the upcoming Dead Iron, first in a new steampunk series! Also up for grabs is  a copy of Dead Iron and reader’s choice of a Magic novel to one lucky winner! 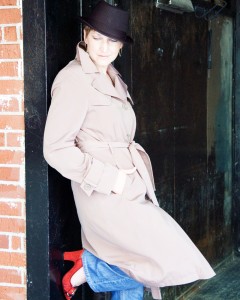 *Don’t forget to check the My Favorite Things Event Schedule to see what’s going on not only here, but at Candace’s Book Blog!

Devon, I’m a huge fan of your Allie Beckstrom series and am so excited about the release of Dead Iron, your new steampunk series. What made you decide to take your writing in such a new direction?

Dead Iron was a story I really wanted to tell and it just happened to fit in a steampunk world best. I love urban fantasy and hope to have the chance to write more in that genre too, but Cedar, Mae and Rose are from a different sort of world filled with gears and guns, monsters and magic, along with love and adventure.

Magic on the Hunt, the 6th Allie Beckstrom novel, was recently released in April. I know it states on your website that there were only six novels planned, would you like to eventually return to Allie’s world?

I am happy to say there will be nine books in the Allie Beckstrom series! Book 7, MAGIC ON THE LINE comes out November 2, 2011 and is a big game-changer for Allie. I am currently working on book 8, which should hit shelves next April, and then book 9 will be out in November 2012 and finish the series.

You also have numerous short stories to your credit. What are the challenges of writing a short story as compared to writing a full length novel?

A short story is like changing clothes in the front seat of a car while driving. The small space means you need efficient use of action, language, and all other maneuverings if you’re going to get to your destination alive. A novel is like dancing alone on a huge stage. The large space calls for big risks, grand motions, and a lot of wow going on, while keeping just enough in reserve (and revealing it at just the right moment) so that the audience is on the edge of their seats and hungry for every little step, right up to the final bow.

What would you say are some of your biggest literary influences?

I grew up on fairytales, fantasy, and science fiction. Writers who have influenced me are Anne McCaffrey, Henry Knutter and C.L. Moore, Roger Zelazny, Raymond Chandler, Andre Norton, Ray Bradbury, and many more.

How about current faves?

You’re a writing machine! When you’re not writing (or knitting), what do you like to do to unwind?

I sleep? No, wait. I used to have hobbies. Oh! I read and knit and sometimes catch a movie. (but mostly I sleep.)

I’m a knitter too, and it’s well known that I’m a big fan of instant gratification, so no sweaters for me. What are your favorite things to knit?

I like small projects like toys, hats, gloves and socks. I have a couple sweaters that are not yet done, but I aim to finish them soon. I’d say my very favorite things are oddities: soap cozies, biscuit blankets, spats, and chthulhu lip balm buddies.

How do you balance a full time writing schedule with family life?

My full time job is writing. That gets the bulk of my hours during the day. If something comes up that eats into my writing time like an emergency trip to the hospital, or an afternoon spent chasing a lost dog, I make up that day’s writing time at night.

There are a couple things I’m excited about simmering on the back burner, but nothing I can talk about just yet. (darn it.)
GIVEAWAY DETAILS
*Giveaway is for 1 copy (ARC) of Dead Iron and a Magic novel (reader’s choice) to one winner!
**GIVEAWAY IS NOW CLOSED**