Today, to kick off the Urban Fantasy portion of My Favorite Things, I’ve got the awesome Faith Hunter on the blog! Her post features one of my favorite characters, skinwalker Jane Yellowrock,and her alter ego, Beast. Jane and Beast are the stars of the series that include Skinwalker, Blood Cross, and the recently released Mercy Blade. Faith is also offering copies of Skinwalker (Jane Yellowrock #1) and Bloodring (Rogue Mage #1) to one lucky winner (please see giveaway details at the end of the post.)

Don’t forget to check the My Favorite Things Event Schedule  for all of the awesomeness to come, and for anything you might have missed!

Please welcome Faith to the blog!

*Jane Yellowrock is the main character of the series that bears her name, by author Faith Hunter. Skinwalker, BloodCross, and Mercy Blade are the current books, with Raven Cursed out in Jan. 2012, followed by Death’s Rival in fall of 2012. Today, Jane Yellowrock and Beast talk about men and food and vampires and shape-shifters and werewolves and, umm, and men, of course, answering questions asked by fans for the last few months.

Beast is a hunter, you are a hunter. Speaking emotionally as well as physically, what do you hunt? 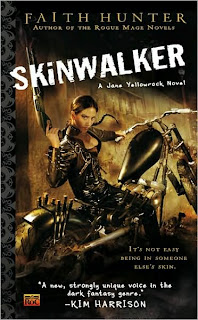 Jane: Physically, I hunt rogue-vamps: vampires who are not sane and have gone rogue, vamps who have started killing, and sometimes eating, humans.

Beast: Beast is good hunter. Beast likes big prey. Jane will not let Beast hunt bison or cow. Or even horse. Horses would run. (Thinks about chasing horses. Flicks up ear tab and looks away, bored. Spots movement out the window. Squirrels racing around tree.) Squirrels are small and tasty but hard to catch. One bite and gone. Need bigger prey. Hunt deer now?

Jane: We can hunt later. Emotionally? Hmmm. I’d like to find another of my kind. If there were any clues anywhere, I’d be hunting one. But so far, nothing.

Jane: Not just yet. Soon.

I know Beast likes deer. What is Jane’s favourite food?

Jane: Steak so rare it’s still got a moo or two left in it. Though, since coming to New Orleans, I have developed a liking for mudbug cooked in beer and spices. Mudbug is crawfish, BTW. Very tasty!

Jane: Oh crap. We can talk about this later. Later! Besides, I thought you were mad at Rick.

Beast: Saw pictures of Ricky-Bo with other woman. Were-woman. Red-haired, sick-were-female. (Chuffs with displeasure. Shows killing teeth. I was mad.) Will not share mate with sick-were-female. But think that Ricky-Bo may not have mated with her by choice. Forced mating is bad.
Jane: (Looks away.) Yeah … And the werewolf did force him, once he was infected by the were-taint. Okay, so maybe Rick didn’t have sex with the werewolf bitch by choice. But he was with a were-cat too. Beast: She bit him?

Jane: I don’t know. Maybe. Maybe I judged him too quickly?

Beast: Cannot decide until we talk to Ricky-Bo. (Licks muzzle. Chuffs with laughter.) But Bruiser and Leo are good. Bed is big. 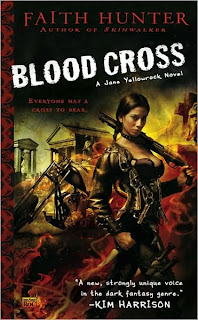 If you could have any man on earth, who would you pick?

Jane: I like men. Human men. Men without fangs. (Thinks of Ricky-Bo. Sighs.) Yeah. Well. Let’s say no vamps, then.

Jane: Um … Master of the City of New Orleans? Not smart. (grins) Sexy, but not a good choice for bed partner.

Beast: (Sends Jane vision of floor, with Leo. Vision of sofa, with Leo.)

No, wait! Only human men? Why is that?

Jane: I’m a Cherokee Skinwalker, the last of my kind. If skinwalkers don’t find and mate with other skinwalkers, then we have to mate with humans, hoping to pass along the skinwalker genes, which are on the X chromosome, to half of our progeny.

Jane: Yeah. You have an interesting point. (Drums fingertips on table.) Hmmm. 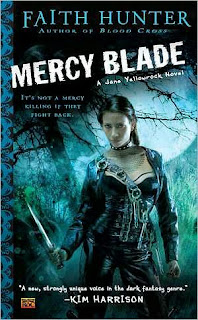 What’s your motto or quotation?

Jane: Have Stakes Will Travel.

Beast: Beast is not prey!

What is your favourite book?

Jane: (Looks back at previous question-and-answers. Worries. Shakes head. Sighs.) Dangerous question, that. You know. Since I’m in a series. If I pick one and I’m not in it, will I disappear?

Beast: Do not like books. (Lifts lips to show killing teeth.) Want to hunt.

If you could be any animal?

Jane and Beast look at one another.
Jane: Ummm. Have you not read my books? I am an animal.

Beast: And I am inside her. Together we are Beast. 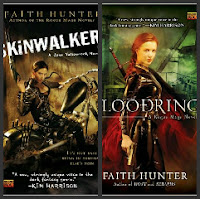 *You may read more about Skinwalker and Bloodring HERE