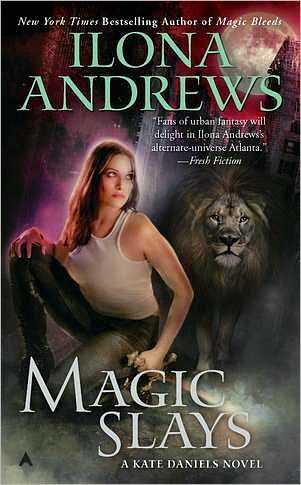 Synopsis:
Plagued by a war between magic and technology, Atlanta has never been so deadly. Good thing Kate Daniels is on the job. Kate Daniels may have quit the Order of Merciful Aid, but she’s still knee-deep in paranormal problems. Or she would be if she could get someone to hire her. Starting her own business has been more challenging than she thought it would be—now that the Order is disparaging her good name, and many potential clients are afraid of getting on the bad side of the Beast Lord, who just happens to be Kate’s mate.So when Atlanta’s premier Master of the Dead calls to ask for help with a vampire on the loose, Kate leaps at the chance of some paying work. Turns out this is not an isolated incident, and Kate needs to get to the bottom of it—fast, or the city and everyone dear to her might pay the ultimate price . . .
REVIEW
*Please note: I really did try to keep this review spoiler free, but if you haven’t read the series, it might be confusing….but intriguing, I hope!

Life is hard as the Beast Lord’s mate. Yeah, no sarcasm there (so jealous!). Actually, life is proving rather difficult for Kate Daniels. Yes, she and Curran are mated, and in that, she couldn’t be happier (and neither could I!!!). However, her professional life is in shambles, after the Knights of the Order did their best to ruin her reputation. She’s started her own PI business, but clients aren’t biting, and she’d rather fall on her own sword then ask the Pack for more financial help. When Ghastek, a powerful Master of the Dead, calls Kate to warn her that an out of control vamp is headed her way, all hell breaks loose, in more ways than one! Kate’s first client wants her to track down an inventor that was kidnapped under her watch, along with the mysterious device he was creating.  When she visits the scene and realizes that some seriously powerful magic has been used, she’ll have to gather all of her resources to find this inventor and the device, which is more powerful than anyone could have imagined, and could destroy everything Kate loves the most!

I’m always happy to return to this alternate Atlanta and ride along with Kate and Co. on their adventures, and Magic Slays is one of the best of the series so far! Poor Kate really can’t catch a break in this one. Along with the kidnap victim she’s hired to find, she also discovers her teenage ward, Julie, has run away from boarding school, for what seems like the millionth time, and is heading her way. Her best friend (and shifter), Andrea is back after a self- imposed exile with vengeance on her mind (with vomiting, smelly, monster dog Grendel in tow), and Kate discovers some secrets about her family that will make her question Curran’s love, and his motives for making her his mate. Then there’s that mystery device…

If you’re already a fan of this series, this one will knock you over, and if you haven’t discovered it yet, run, don’t walk, to the bookstore or download Book 1 (Magic Bites) ASAP! The authors ratchet up the intensity and the emotion in Magic Slays and I think readers will be very satisfied with how things tie up with plenty of new material for future novels. Highly recommended!