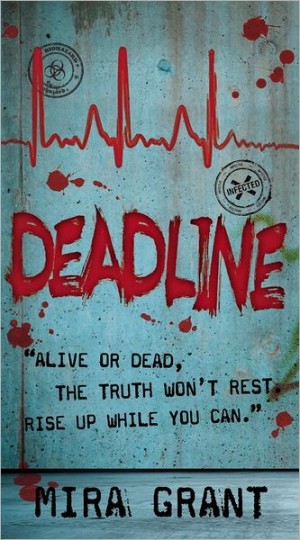 Shaun Mason is a man without a mission. Not even running the news organization he built with his sister has the same urgency as it used to. Playing with dead things just doesn’t seem as fun when you’ve lost as much as he has.

But when a CDC researcher fakes her own death and appears on his doorstep with a ravenous pack of zombies in tow, Shaun has a newfound interest in life. Because she brings news-he may have put down the monster who attacked them, but the conspiracy is far from dead.

Now, Shaun hits the road to find what truth can be found at the end of a shotgun.

REVIEW
I don’t want to live in the world that Mira Grant described in Feed, and now in Deadline.

I don’t want to live in a house that has tiny windows, so that anything about 40lbs can’t get through, or have to endure blood tests at every entry or exit.

I don’t want to never again experience the joy of an open air concert or festival.

I don’t want to not be able to offer comfort to a stranger by giving them a hug, or holding their hand.

I don’t want to live in a world where I might have to shoot someone I love to save them from a fate worse than death.

This is the world put forth by the author, and it’s just the tip of the iceberg. Almost 30 years after the cure for the common cold turned into hell on wheels, the world is still recovering from the devastation. Some parts of the world will never be reclaimed, and the effects of this disease roam the wilds, seeking to infect and feed. In Deadline, news blogger Shaun Mason is our narrator, and still hasn’t recovered from events that affected him and his team in the worst possible way. When a CDC doctor fakes her own death and shows up, asking for his help, all hell breaks loose…again. He’s now on a mission to uncover a vast government conspiracy that could affect the whole of humanity and will uncover secrets that will certainly change his life, and those he cares for, forever…and he has nothing to lose.

If you haven’t yet discovered this superb series by Mira Grant (aka Seanan McGuire), then you’re in for a wild ride. Feed and Deadline feature some of the best post-apocalyptic writing that I’ve read, hands down. Not just zombie books, these novels explore the nature of fear in all its forms and will take you on an emotional roller coaster that will haunt you for days after you’ve stopped reading. The characterizations are phenomenal, and the attention to detail is no less than it was in Feed. Sometimes it’s hard to follow up such amazing work, and sometimes second novels in a series suffer a bit. Not Deadline. It’s just as good as Feed, and you’ll find yourself plowing through this 600+ page novel in no time. I missed quite a bit of sleep finishing this one up. Was it worth it? Totally.