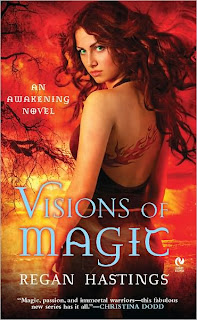 In the ten years since magic has reemerged in the world, witches have become feared and hunted. For weeks Shea Jameson has been haunted by visions of fire. When she unintentionally performs a spell in public, she becomes one of the hunted. Her only hope is Torin, a dangerously sensual man who claims to be her eternal mate.

I’m usually not huge on paranormal romance. It’s not the paranormal I have a problem with, but usually the romance part. However, I really enjoyed Visions of Magic and pretty much read it in one sitting! The novel starts off with a bang, when our heroine, Shea Jameson, accidently uses her burgeoning magic while defending herself against an attacker. The attacker goes up in flames, and someone calls the MP (Magic Police). Before she can be arrested, she is grabbed by a pair of strong arms (strong arms that are attached to a hottie named Torin), and whisked away in a column of fire. The chase is then on for Shea, and she soon finds out that Torin is her Eternal (her one and only true mate). The author has created a world where witches are once again being burned at the stake and imprisoned at interment camps. To the general public, a good witch is a dead witch, and to those that desire their power, Shea is a very powerful and attractive target. Torin must convince Shea of her true identity and ensure that they are mated in order to make each of their powers as strong as they can possibly be.
At the start of the book, Torin comes off as very Me-Tarzan, You-Jane, but he really grew on me, and his absolute love for Shea and dedication to protecting her was very appealing, and as the story unfolds, you understand why he is like he is. Regan Hastings is a veteran writer, and it shows. The story moves  at a really good clip, and there was never a dull moment. There are some really steamy scenes, but since sex magic is important for Shea and Torin as they come into their powers, I didn’t find them to be tedious and distracting (as I sometimes do with romance). Shea and Torin’s story was exciting, and I’ve learned that each subsequent book in the series will be about a different witch, so I’m very excited to meet the next witch and read her story!

Read my interview with Regan HERE