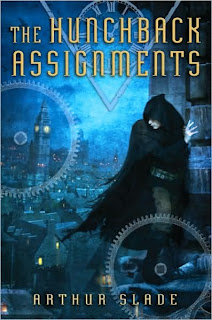 Synopsis: The mysterious Mr. Socrates rescues Modo, a child in a traveling freak show. Modo is a hunchback with an amazing ability to transform his appearance, and Mr. Socrates raises him in isolation as an agent for the Permanent Association, a spy agency behind Brittania’s efforts to rule the empire. At 14, Modo is left on the streets of London to fend for himself. When he encounters Octavia Milkweed, another Association agent, the two uncover a plot by the Clockword Guild behind the murders of important men. Furthermore, a mad scientist is turning orphan children into automatons to further the goals of the Guild. Modo and Octavia journey deep into the tunnels under London and discover a terrifying plot against the British government. It’s up to them to save their country.
MY REVIEW

At the tender age of one, Modo is rescued from a traveling freak show by the mysterious Mr. Socrates, who takes him in and raises him to be well read and knowledgeable in the fighting arts. Deformed and never knowing his mother and father, Modo comes to rely on Mr. Socrates, the kindly housekeeper, Mrs. Finchley, and his fighting instructor, Tharpa, who was also taken in as a child by Mr. Socrates. At age 14, Modo is taken into London (his first time outside of his rooms), and given his first “assignment”: to survive on his own. Mr. Socrates assures Modo that he will find him when the time is right, and, terrified, Modo sets out alone. Six months later, after discovering he has a talent for finding lost things, he sets himself up in a modest room upstairs from a pub and begins taking on clients under the name Mr. Wellington. Modo has another talent too. He can transform himself, for hours at a time, into someone completely different , escaping from the hunchback and hideous countenance that has haunted him his whole life. When he meets the beautiful and mysterious Octavia Milkweed, also an agent for Mr. Socrates, he’s drawn into a shadowy world of conspiracy, kidnapping, and murder.
This was just a delightful steampunk adventure! Combining elements of The League of Extraordinary Gentlemen, The Hunchback of Notre Dame, and The Island of Dr. Moreau, The Hunchback Assignments takes its readers on a romp through a gaslit London full of treachery, secret societies, evil scientists, and clockwork monstrosities. Modo is an endearing character, and Octavia is a spunky delight as our heroine and Modo’s crush. If you like your adventures with 19th century flair and Dickensien touches, you’ll love this book. In The Hunchback Assignments, Arthur Slade has created a world that I’ll look forward to returning to time and time again!