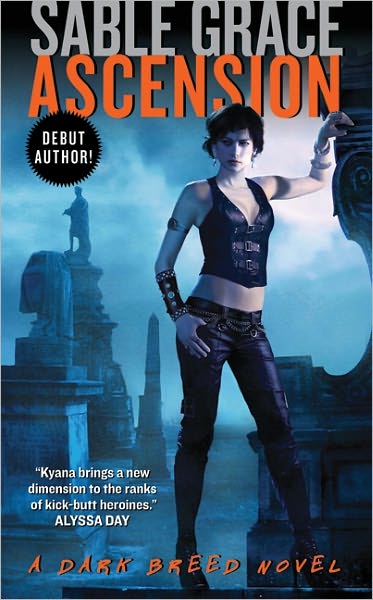 Synopsis:
The gates of hell have opened, and one woman will stand in the crossfire as the Dark Breed—vampyre, demons, shape shifters—and mankind fight their last battle for survival.
Kyana is half Vampyre, half Lychen . . . and the last of her kind. Determined, dangerous, and damned, she has no love for the mortals who have imprisoned and misused her. But when the Order of Ancients entrusts her with a mission—to find the key that will send the Dark Breed back into Hell for eternity—Kyana has no choice but to accept.

She is furious to learn her assignment comes with an escort . . . Ryker, a demigod and fierce warrior who long ago found a way under her skin and stayed there. In a shaky alliance, they discover an ancient cult with dangerous motive and a god who seeks to destroy all others. And as Kyana begins to feel the heat that threatens to bind her to Ryker, she knows she has to resist. For it could only mean the undoing of them both . . .

REVIEW
Kyana is half Lychen, half Vampyre who works as a tracer for the Order of Ancients. She is Dark Breed that has chosen to use her powers for good, and is entrusted by the Order to find an ancient key that can send the rampaging Dark Breeds back to Hell. See, the Gods’ powers are weakening, and the Chosen (those that will replace them)are being killed one by one. The only problem is Ryker, the demi-god that she’s partnered with. See, a while back, Kyana tried to get Ryker in the sack and he turned her down, but it’s probably not for the reason you might think. It’s much more complicated than that, and so is their relationship, which is part of the fun of the awesome debut!

Ascension is categorized as Paranormal Romance, however, it’s firmly situated in the Urban Fantasy realm. Do not let the “Paranormal Romance” on the spine scare you off. For one thing, there’s no steamy stuff until about two thirds in, and it’s no more than you’d find in most urban fantasy. The writing duo that is Sable Grace has created a unique fantasy world where gods and myths are real, and “bump in the night” is par for the course. Some of my favorite scenes include Kyana’s roommate and best friend, Haven, who is a witch. Their banter is witty and genuine, and the warmth and history between them is obvious. There are some truly terrifying creatures and plenty of rip roaring action, and the romantic friction between Kyana and Ryker keeps a nice hum of tension threaded throughout. Ascension has some wonderful twists and turns that kept me guessing, and a revelation at the end that, frankly, had my jaw on the floor! This book kicks serious ass, and I can’t wait for the next one!