Interview and Giveaway with Yvonne Woon!

Kristin •April 25, 2011Fantasy, Urban Fantasy, Young Adult
The lovely Yvonne Woon, author of Dead Beautiful was kind enough to take the time to answer a few of my questions!
Also up for grabs is one copy of Dead Beautiful! 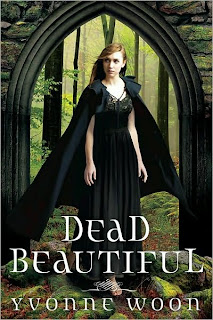 Please see giveaway details at the bottom of this post!

Yvonne, for that haven’t yet read Dead Beautiful, could you tell us a bit about its heroine, Renee Winters?
Renee is a freckled, athletic sixteen year old from California, who is thrust into the strange and mysterious world of Maine after her parents are murdered. She’s curious, opinionated, and often speaks before she fully formulates her thoughts…she also has a complicated past, though she isn’t aware of it until she arrives at Gottfried Academy.

Did you always want to be a writer? Did you find writing, or did it find you?

I did always want to be a writer, though not always a novelist. At first I wanted to be a humor columnist, and wrote a lot of pieces about people I knew growing up. But I soon ran out of subject matter (as my life was really not that interesting!!), and decided I wanted to be a journalist. That ended when I found myself wanting to make up the stories instead researching them. I then set my sights on being a poet, but after a slew of really terrible poems, I dropped that too. That’s when I found my way to novels.
When you started writing Dead Beautiful, did you know where the story would go, or did you plan to see where Renee took you?
I knew a little. I plotted the story in an outline, though once I started writing, everything changed. The characters came out very different than their original sketches, and they ended up wanting and doing different things, so I was very surprised when I got to the end. It was a really exciting experience.
Did you have any favorite books or authors when you were a child? Were there any that particularly influenced you as a writer?Any current favorites?
I read a lot of Kurt Vonnegut when I was younger. I especially loved Cat’s Cradle and Welcome to the Monkey House. I also liked Dickens and the Bronte sisters. I think I learned a lot about plotting from reading those heaping novels. I also was deeply affected by The Secret History by Donna Tartt, which I can’t recommend enough. There’s a lot of her in Dead Beautiful.
I know that the road to getting published is sometimes bumpy. How did you celebrate when you found out Dead Beautiful would be published?
I actually broke down crying. I was walking to the Columbia library when my agent called me. I thought he was lying at first, but by the time we hung up, I was in tears. The first thing I did was go to this fancy bakery, which has the BEST rainbow cookies in Manhattan (maybe in the world). I never used to let myself buy them because they’re really expensive, but that day, I bought an entire bag, and brought them to the library, because sadly, I still had to study.
When you’re not writing, what do you like to do to unwind?
I run a lot, and ride my bike. I also like to cook, go to the movies with friends, normal stuff, really. And read, of course, there’s always reading.
Any news you’d like to share about upcoming projects?
The sequel to Dead Beautiful should be out next winter (winter 2012). It’s called Life Eternal. It follows Renee and Dante’s story, though in very different context. All I can say about it for now is that it involves French. And a lot of trekking through the snow.
*GIVEAWAY DETAILS*
Giveaway is for one copy of Dead Beautiful by Yvonne Woon
Giveaway is International
Must be 13 to enter
Please leave a comment on this post with your email address
You may Tweet, Blog, or Facebook this post for ONE extra entry (leave a separate comment)
Giveaway Ends 5/2/11!