Guest Post and Giveaway with Jessa Slade, author of the Marked Souls series!

Kristin •April 7, 2011Paranormal, Urban Fantasy
Joining me today I have the lovely Jessa Slade, author of Seduced by Shadows, Forged of Shadows,  and the just released Vowed in Shadows! She’s here to talk about dark romance and dark heroes, and is also giving away a *signed* copy of VOWED IN SHADOWS and a set of the Marked Souls romance trading cards! You’ll find the giveaway deets at the bottom of the post!

Please welcome Jessa to the blog! 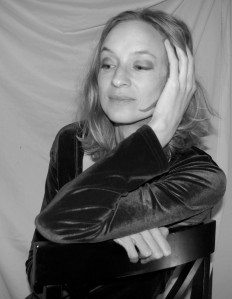 Awhile ago on Twitter the question went around, “What is dark romance and who writes it?” My answer: In a dark romance, love doesn’t ‘save the day.’ It just saves the hero’s and heroine’s souls. The day is still f’d.

And when I thought a bit more about it, I decided that even though I fancy myself a cynical, sarcastic, fatalistic hermit, I don’t write dark romance, because in my story heart of hearts, I believe love WILL save the day.
Yes, I realize I might be naïve, crazy and/or just plain wrong.
When I Googled up the news headlines to see how the day is doing, I found war with Libya, nuclear meltdown, higher rates of autism, and the Gulf oil rig execs getting safety bonuses for the year they killed a bunch of people and poisoned a chunk of our coastline. And that was just above the fold.
Okay, so love hasn’t saved the day YET.
I also realize we may need a few bad-ass, take-no-prisoners tough guys to seize the day while love catches up (panting and out of breath, probably, and for all the wrong reasons). Which is why, though I don’t write dark romance, I do write dark heroes.
To me, a dark hero was scarred a little deeper and alone a little longer, and took a few more wrong turns than your average hero. Unlike his long-suffering author, HE may not believe love can save the day. 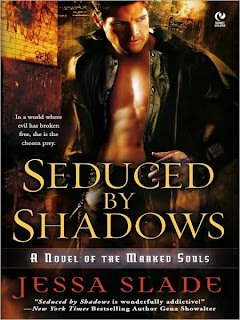 Which, of course, is why he needs a smart, sassy, strong heroine.
Because I believe a man who must be dragged kicking and screaming into the light of love is the best hero for bringing that love to the world. It won’t be easy or quick for the world, so why should it be easy or quick for our hero? (Although he will get his Happily Ever After in 400 pages or fewer; more than the world can hope for.)
In this scene, my ex-missionary hero wrestles with his feelings—and with the former pole-dancing heroine. Because he was maimed in an earlier story (possibly my fault) he is wrestling one-handed. Both Jonah and Nim are possessed by the powers of repentant teshuva demons in order to fight the evil tenebrae demon-monsters, which are currently surrounding them. To make Jonah’s indecision a bit more fraught, if he can’t get Nim to work with him (after he fumbled the emotional dismount of an earlier love scene) I set it up so they’ll be eaten by bad guys. You’d think THAT would motivate him.
* * *
Jonah knew he needed to convince Nim. But how? With his body, with a look, with words? “I have nothing to give you in return,” he whispered. “My life is pledged to the league; my soul to the teshuva.”

“I didn’t ask for either of those.”

A heated flush rose in his face. This was the dance, he realized. The back-and-forth of what they could be to each other. For each other. “What’s left of my body isn’t worth the having.”

The blush turned to flame and heated him to the core. “There’s nothing more of me.”

“The tenebrae know there’s always more,” she said. “And they want the very last of it. Light and laughter. Hope and peace.” She hesitated. “Love.”

The word hit him like a tenebrae fang through the belly, ripping upward to lodge in his throat. “I’ve no more of that either.”

She shot him a glare and strained away from him with all her dancer’s strength and demon’s power. “You lie again.”

He struggled to hold her, amping his teshuva against her fury, though his one-handed grip left him precariously unbalanced. “Nim, you ask too much.”

The closest feralis fell back on its haunches, pointed its muzzle upward, and let loose a howl of triumph. The rest answered in a cacophony that brought another rain of bricks tumbling down.

Aaaaand apparently I should let Jonah be eaten by bad demons! How could he NOT fall instantly, unfailingly, perfectly in love?
Oh right, because the world doesn’t always work that way. But he’ll get there—through the war, the fear, the confusion, the lies; that’s what makes him a dark hero.
**GIVEAWAY DETAILS**
READ CAREFULLY
Do you think love can really save the day? Do you have a favorite dark hero fighting to make that happen? Leave an answer in the comments, along with your email address,  for a chance to win a signed copy of VOWED IN SHADOWS along with a set of the three Marked Souls romance trading cards.
*Giveaway is INTERNATIONAL, and you must be at least 18 to enter.
*Giveaway ENDS 4/14

Thank you, Kristin and My Bookish Ways, for letting me post! And thanks to the rest of you for reading!

* * *
Are you online too much? So is Jessa! You can find her at http://www.facebook.com/jessaslade and http://twitter.com/jessaslade or read Chapter 1 of VOWED IN SHADOWS at http://tinyurl.com/vowedinshadows.