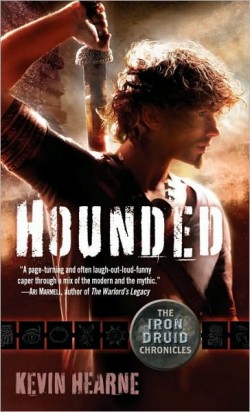 Atticus O’Sullivan, last of the Druids, lives peacefully in Arizona, running an occult bookshop and shape-shifting in his spare time to hunt with his Irish wolfhound. His neighbors and customers think that this handsome, tattooed Irish dude is about twenty-one years old—when in actuality, he’s twenty-one centuries old. Not to mention: He draws his power from the earth, possesses a sharp wit, and wields an even sharper magical sword known as Fragarach, the Answerer.

Unfortunately, a very angry Celtic god wants that sword, and he’s hounded Atticus for centuries. Now the determined deity has tracked him down, and Atticus will need all his power—plus the help of a seductive goddess of death, his vampire and werewolf team of attorneys, a sexy bartender possessed by a Hindu witch, and some good old-fashioned luck of the Irish—to kick some Celtic arse and deliver himself from evil.

REVIEW
There’s a letter from Tricia Pasternack, a Del Rey editor, in the beginning of the Advance Reader’s Edition of Hounded, by Kevin Hearne. In it she describes something called the Kevin Hearne Effect, the rather magical feeling you get when one first starts Hounded, and that continues until the last page. When I started Hounded, I immediately knew exactly what she was talking about!Atticus O’Sullivan is a 2,100 year old Druid (biologically 21) who’s put down roots in Arizona and is living peacefully until a series of attacks shatter his quiet existence. You see, an ancient foe wants something Atticus has, and won’t stop until he gets it back.

Hounded is told from Atticus’ point of view, and what a delightful voice! Wry, witty, and charming, Atticus is my new hero, and in Hounded, we’re lucky enough to accompany him as he and his friends plan a showdown with this powerful foe. And what friends! Kevin Hearne has created an amazing cast of supporting characters, but my favorite by far is Oberon, Atticus’ Irish Wolfhound that he can communicate with using his mind. Oberon is a sweet, scene-stealing pleasure, and (at the risk of dating myself), reminds me quite a lot of Einstein, the canine with human intelligence in Dean Koontz’s Watchers. The banter between Atticus and Oberon made me laugh out loud, and Oberon is almost as big of a presence as Atticus! Add to that a death Goddess named Morrigan, the huntress Flidais, a vampire and a werewolf (both Atticus’ lawyers), a elderly, feisty neighbor that helps Atticus more than once, a coven of witches who may or may not have Atticus’ best interests at heart, a sword that is the source of Atticus’ problems, and you you’ve got the recipe for one of the best books of the year! In Atticus’ world, the Gods are alive and well, and aren’t afraid to make themselves known. Norse, Christian, Indian, you name it, they all exist, and if you have a love of Celtic myth, this is the book for you. The magic system is fascinating and unique and it’s obvious the author put quite a bit of time and research into exploring the history of Druids and Druid magic. Inevitable comparisons will be made to Jim Butcher’s Dresden Files, and to me, that’s a good thing! I got to geek out a little with this one too, because there’s lots of references to Star Wars and other awesomeness! In a sea of female urban fantasy heroines, Atticus and his crew are a breath of fresh air! Fans of fantasy and urban fantasy will eat this one up, and the good news is that you won’t have to wait for books 2 and 3 to come out. Hexed and Hammered drop in June, and readers will be lining up to get their hands on them! Hounded is a series debut that is absolutely not to be missed!