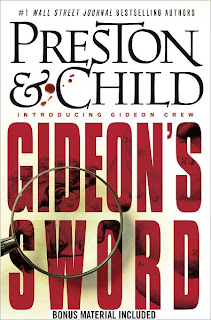 Publisher: Grand Central Publishing (Feb. 2011)
Review galley courtesy of NetGalley
Introducing Gideon Crew: trickster, prodigy, master thief
At twelve, Gideon Crew witnessed his father, a world-class mathematician, accused of treason and gunned down.
At twenty-four, summoned to his dying mother’s bedside, Gideon learned the truth: His father was framed and deliberately slaughtered. With her last breath, she begged her son to avenge him.
Now, with a new purpose in his life, Gideon crafts a one-time mission of vengeance, aimed at the perpetrator of his father’s destruction. His plan is meticulous, spectacular, and successful.
But from the shadows, someone is watching. A very powerful someone, who is impressed by Gideon’s special skills. Someone who has need of just such a renegade.
For Gideon, this operation may be only the beginning . . .
MY REVIEW
Gideon’s Sword opens with 12 year old Gideon’s father being shot down by federal agents. Eight years later he finds out his father was involved with a highly top secret incryption program. The Soviets cracked it and 26 US spies were killed and Gideon’s father was the scapegoat. On her deathbead, Gideon’s mother asks him to get revenge for what happened to his father.Present day: Gideon now works at Los Alamos, and is still haunted by his mother’s words.Gideon sets out to avenge his father, and after he succeeds, what is left for him?Gideon finds out he has an inoperable condition in his brain and will die within a year, so, seeing no other choice, he accepts a dangerous job from the mysterious Effective Engineering Solutions,  tracking down a Chinese national that might have the plans for a weapon of mass destruction. Gideon will have to use all of his skills, even skills learned as an art thief, if there’s any hope of getting those plans.

Let me say that I am a longtime, devoted (seriously devoted) fan of Lincoln and Child, especially their series of novels featuring Aloysius Pendergast. However, it seemed to me, that in Gideon’s Sword, they might have been phoning it in a bit. Gideon wasn’t nearly as likeable as some of their other characters, and, again, unlike the Pendergast novels, I didn’t find myself getting emotionally involved. It was entertaining enough, and had lots of fun action sequences, but seemed to lack the depth and intensity of their other novels. It was a mildly entertaining diversion though, and will certainly give the series a chance, in hopes that it will pick up a bit in the next installment. This was more in line with a 2.5-3 rating, because I didn’t feel like I wasted my time, per se, but it fell short for me, considering the impeccable quality of their other work.
Purchase Gideon’s Sword: Amazon | Barnes & Noble
Instant Gratification: Kindle | Nook