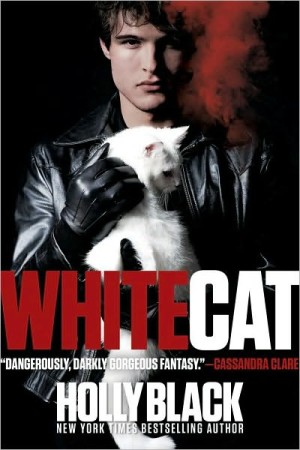 White Cat by Holly Black-This was an unusual read, and a nice change of pace. Told from Cassel’s point of view, the book opens with Cassel on a ledge at the boarding school he attends, having sleepwalked to get there. It was a fun opening to a fun book! Cassel is the only non-worker in a family of workers, which means he can’t work any kind of curses, or spells. He’s always felt left out, and is most definitely treated as the black sheep by his brothers. When he begins having strange dreams about a white cat that talks, he starts to question everything he’s ever known about his family, and himself.

Cassel is a fun character, and I don’t know why, but there’s just something exciting about a con artist, or grifter, and Cassel is definitely my favorite con artist. He really enjoys the con and is good at it, and that really comes across in how Ms. Black wrote the character. A shocking reveal in the beginning is that he actually has memories of killing a childhood friend, Lila, and of his brothers covering it up. The book follows Cassel as he discovers a dark conspiracy involving his family, Lila, and his memories, and he has to get to the bottom of it before it’s too late! A fast paced, diverting read!