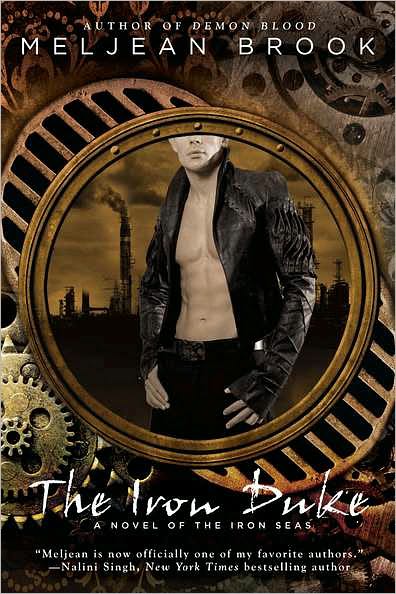 After the Iron Duke freed England from Horde control, he instantly became a national hero. Now Rhys Trahaearn has built a merchant empire on the power-and fear-of his name. And when a dead body is dropped from an airship onto his doorstep, bringing Detective Inspector Mina Wentworth into his dangerous world, he intends to make her his next possession.
But when Mina uncovers the victim’s identity, she stumbles upon a conspiracy that threatens the lives of everyone in England. To save them, Mina and Rhys must race across zombie-infested wastelands and treacherous oceans-and Mina discovers the danger is not only to her countrymen, as she finds herself tempted to give up everything to the Iron Duke.
MY REVIEW
I read The Iron Duke for a monthly feature at The Spinecracker called DARE. Jessica (aka The Spinecracker) thought I needed more romance in my reading, so this one’s for her!  You may read MY Dare for Jessica HERE.
Luckily for me, The Iron Duke had plenty of romance, but also plenty of adventure! The Iron Duke opens with Detective Inspector Mina Wentworth at a ball, where she’s called away to the scene of a crime at Rhys Trahaearn’s mansion. A body had been thrown from an airship onto the Duke’s doorstep, and Mina is mystified as to who would do such a thing, and why. The Duke is immediately drawn to Mina, and vows to possess her. Mina, however, is determined that no such thing will happen, and embarks on a single minded mission to find the perpetrator of this heinous crime. With the help of her constable, Newberry, and of course, the Duke, Mina will have to traverse unknown dangers unlike any she’s ever encountered. However, The Duke may be more dangerous than all of the zombies and sea creatures put together! When Mina and The Duke find out that a massive weapon may have fallen into the wrong hands, and Mina’s brother has gone missing, they have no choice but to follow the case to its conclusion!
I’ll be honest, I would have reacted to The Duke the same way Mina does when he tells her in no uncertain terms that he would have her. He’s brutish, insufferable, and boorish, but…he grew on me. Yep, the big, possessive oaf grew on me. Needless to say, he grew on Mina too, but I digress… I really enjoyed the world that Meljean Brook created. The Iron Duke takes place in an England once under fearsome Horde rule, and Mina is a product of one of the Horde’s most heinous mind control procedures. Every day she endures stares and bigotry, and cannot go anywhere without protection. People are infected with nanoagents that make them stronger and healthier, and heal faster after being wounded. Only those that returned to England after The Iron Duke freed it from Horde rule are not infected, and sickness runs rampant among them. They can, however, choose to be injected with the nanoagents, and it isn’t unusual to go to the Blacksmith to replace a missing arm or leg with mechanical flesh. The Iron Duke is just pure, steampunk fun! Rich in detail, with airships, pirates, zombies, and of course, passion run amock, it just doesn’t get much better than this! Don’t be fooled by the beefcake cover! Yes, there’s sexy bits, but this was an intelligent, exciting book, and the storyline certainly wasn’t filler just to get to the next sex scene. In fact, no one gets busy for about two-thirds of the book, so the buildup is that much better!The bottom line is that The Iron Duke is not to be missed for fans of Steampunk adventure, fantasy, and yes, romance fans. This is my first book by Meljean Brook, and it won’t be my last!