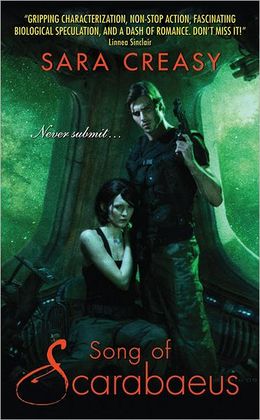 Song of Scarabaeus by Sara Creasey (HarperCollins, April 2010)- Song of Scarabaeus opens with Edie Sha’nim being kidnapped by pirates, which isn’t necessarily a bad thing for her. They want her to use her talent to help them release a couple of Crib serfs, so she goes along for the ride. Then she founds out they’ve created a mental leash between her and one of the serfs, Finn, and her goals abruptly change. If Finn goes out of range, the leash will explode in his brain, killing him. If Edie dies, he will too. When Edie finds out that the pirates are stealing Crib technology to help Fringe worlds, she starts to think that maybe working with them isn’t all that bad, but nothing is as it seems, and Edie must make choices that could not only end her life, but Finn’s as well.

I loved this book, just loved it! It reminded me a bit of Ann Aguirre’s Sirantha Jax series, although Edie and Sirantha are very different characters. I’m a relative sci-fi newbie, and usually shy away from hard sci-fi, which this isn’t, but it does have some elements that a newbie might have trouble with at first. No worries though! You get used to the lingo, and Ms. Creasy paints such a full and layered world that will pull you in and not let you go until the last page.

Edie is a talented cypherteck, which means that she has the power to seed and terraform new worlds using biocyph technology. She is a valuable commodity, one that the corporate conglomerate Crib, not to mention the Fringe, will do just about anything to get their hands on. I loved the sexual tension between Edie and Finn and the relationship that the author creates between them is intense, but at the same time tender, and I enjoyed peeling back the layers of Finn’s quiet and strong personality. There’s plenty of adventure here, and the deep space setting serves to make every nuance of the novel that much richer, and foreboding in its complexity. There’s something about good space opera that I absolutely love, and Song of Scarabaeus is a mature and exquisite addition to the genre! It was also nominated for the Philip K. Dick Award, and it’s a well deserved nomination!