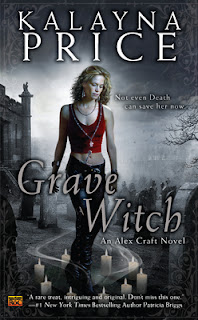 As a grave witch, Alex Craft can speak to the dead-she’s even on good terms with Death himself. As a consultant for the police, she’s seen a lot of dark magic, but nothing has prepared her for her latest case. When she’s raising a “shade” involved in a high profile murder, it attacks her, and then someone makes an attempt on her life. Someone really doesn’t want her to know what the dead have to say, and she’ll have to work with mysterious homicide detective Falin Andrews to figure out why…
MY REVIEW
Alex Craft can talk to the dead. Or rather, she can talk to shades, memories that are left after someone dies. When she gets a call from her sister, asking her to investigate the death of presidential hopeful (and poster boy for the Humans First Party) Governor Theodore Coleman, she gets a bad feeling. Things get worse when a friend on the force asks her to take a look at a recent murder victim, and she is physically attacked by its shade…which shouldn’t be possible. Then there’s the body that isn’t a body.
It’s been 70 years since The Magical Awakening that brought magical creatures out into the open, and Nekros City certainly has more than its share of magic. In addition to dealing with the shade attack, and the mystery surrounding the Governor’s death, she also has a rather cranky (yet sexy) detective on her tail, and he won’t let up. Then Alex finds out she’s been infected with a soul sucking virus from the shade attack, and now it’s a race against time to find out what’s going on, before she loses her life, and her soul.
Grave Witch was just pure fun! Alex Craft is a great new heroine to fall in love with, and I really enjoyed the world building. When Alex uses her “grave site”, it layers a decaying version of the world over reality, and the sensations Alex feels when she talks to the dead are fascinating. Add Death to the equation, especially a Death that looks hot in jeans, and only Alex can see, and it completes this fun mix of police procedural, magic, witchcraft, soul switching, and romance. Grave Dance (Alex Craft 2) comes out in July, and I’ll be sure to snap it up!
Stalk the author: Website
Order Grave Witch: Amazon | Barnes and Noble
Pre-order Grave Dance: Amazon | Barnes and Noble